WARANGAL: Demanding the release of Revolutionary Writers’ Association (Virasam) leader P Varavara Rao and 10 others, who were arrested in the Bhima Koregaon case, members of the civil liberties associations of Warangal district are mobilising support for an agitation to be staged at Indira Park Dharna Chowk on May 31.
Read more 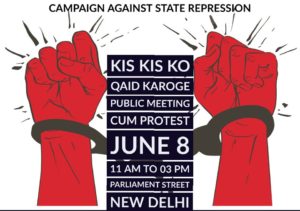 By Campaign Against State Repression On Rights Activists

The Special Court designated under the Unlawful Activities Prevention Act (UAPA) in Pune has ordered copies of forensic reports submitted along with the police report, to be furnished to human rights lawyer Surendra Gadling and activist Arun Ferreira, accused in the Bhima-Koregaon case.
Read more

The Times of India / By Vishwas Kothari, TNN

Pune: Special UAPA judge Kishor D Vadane has ordered that copies of the seized electronic devices, submitted to the court by the investigating officer (IO), be prepared and given to the accused in the Elgar Parishad case in a videographed exercise in the presence of an expert from the forensic science laboratory (FSL).
Read more

They had earlier argued that the police had not followed the proper procedure in submitting the electronic data before the court, following which the special court had then directed the accused to file an application in this regard.
Read more 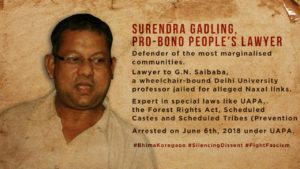 The Hindu / By Shoumoji Banerjee

Stating that there was nothing seditious about the speeches made by participants at the Elgar Parishad of December 2017, human rights lawyer Surendra Gadling on Friday accused the prosecution of conducting a media trial in the case.
Advocate Gadling, conducting his own defence, was replying to public prosecutor Ujjwala Pawar’s arguments that sought to deny bail to him and the other activists arrested in the case.
Read more

The Indian Express / By Explained Desk

The prosecution has now claimed before a Pune city court that people like former Supreme Court judge Justice P B Sawant were “used” by the so-called naxal “front organisations” to further their objectives.
Read more

To the authorities, it is an offense whenever anyone raises voice against repression and torture on the poor, indigenous, fallen, mostly identified as Dalit, people and nationalities smaller in number. To the authorities, it is considered an offense whenever someone stands by these people. Social and human rights activists raising voices of protest against repression on these people are being sued under repressive laws. They are either arrested or threatened with arrests. Names of a few of such personalities are already in the media. They include Sudha Bharadwaj, Varavara Rao, Gautam Navlakha, Vernon Gonsalves, Arun Ferreira, Father Stan Swamy, Anand Teltumbde, Surendra Gadgil, Sudhir Dhawale, Rona Wilson, Mahesh Raut, Shoma Sen. They are from different parts of the country: Delhi, Haryana, Hyderabad, Mumbai, Goa, Ranchi, Nagpur, or in some other places. There are many such personalities, whose names are not found in media.
We appeal to all to join this convention for opposing such repressive measures. 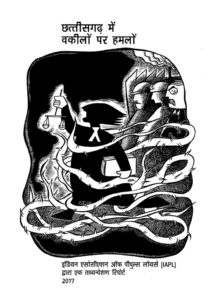 The Times of India / By TNN

Pune: District government pleader Ujjwala Pawar said on Thursday that the prosecution has furnished to the special UAPA court all the investigation papers and seized documents, including electronic evidence and phone records, to show that a prima facie case exists against all the accused in the Elgar Parishad case and they are not entitled for bail.
Read more