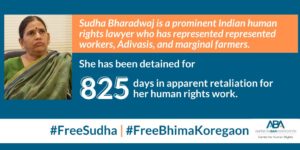 The @chr_aba report found that Ms. Bharadwaj has been subject to numerous fair trial violations, including prejudicial public statements by the police and lack of independent public witnesses. @UN_SPExperts @UNIndepJudges 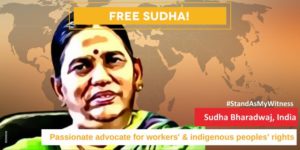 CIVICUS: This #16Days we continue the call for #India to free #WHRD Sudha Bharadwaj, an activist and human rights lawyer who has spent over 2 years in detention.

The Times of India / by Siva G

The Wire / by Gali Nagaraja

Driven to a frenzy over purported statements given by Maoist sympathisers, Andhra police have arrested several human rights activists from Andhra Pradesh and Haryana.
Hyderabad: Athram Suguna, a 38-year old school teacher of the Gond tribe from Telangana’s Fakrigutta in Adilabad district, has been caught in a cat-and-mouse game with no end in sight.
Suguna works as a school assistant in a zilla parishad high school at Utnoor. After a group of suspected Maoist sympathisers supposedly spilled the beans on a network of Maoists to the police, the latter have framed her in a case under the draconian and stringent Unlawful Activities (Prevention) Act.
Read more

To Why Stan Swamy, 83, Couldn’t Get A Straw, Probe Agency’s 10-Point Reply

Father Stan Swamy, the 83-year-old tribal rights activist who suffers from Parkinson’s disease and was arrested last month over his alleged involvement in the Bhima-Koregaon case, couldn’t get a straw and sipper for around four weeks because the National Investigation Agency (NIA) didn’t have them, the agency has said.
In a 473-word news release divided into 10 points, the agency on Sunday said it never confiscated Mr Swamy’s straw and sipper during his arrest nearly two months ago. “NIA had conducted his personal search in presence of independent witnesses and no such straw and sipper were found,” it said.
Read more

A special NIA court has rejected Jesuit priest and Parkinson’s patient Stan Swamy’s request for a sipper & straw after giving probe agency 20 days to respond.
Is an inmate required to wait for a month to get basic articles, such as a sipper and straw for a Parkinson’s patient?
Read more 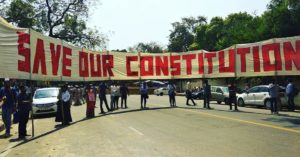 The Leaflet / by Jacob Peenikaparambil

The Constitution of India was adopted more than two years after independence from British rule. It provided a common vision and set goals towards which both the government and people of India could strive as well as the foundational principles of governance of a nation.
Along with celebrations, this day is also for introspection for Indians. How far has the vision and goals of the constitution been realised? …
Dissent is demonised as anti-national by the government and the ruling party. The judiciary that is entrusted with the task of protecting the fundamental rights of the citizens is often shirking from its responsibilities.
Read more

In times when the Supreme Court is selectively granting relief for wide-scale violation of constitutional rights, it is important to save the constitution by saving the Article which embodied the heart and soul of the Constitution according to Dr Ambedkar i.e Art 32…
Fr Stan Swamy and fifteen others who are ‘allegedly’ involved in the Bhima-Koregaon conspiracy case are in jail- some of them languishing for more than two years now. Besides these, there are several others imprisoned under the UAPA, and were also charged and arrested on the archaic ‘sedition’ law and even on ‘contempt of court’.
Read more

From sippers and sweaters to mail and mulaqats, how prisoners are being kept waiting for basics

Letters from wife? Rejected. Sipper for Parkinson’s patient? Court hearing awaited. Warm clothes to deal with the capital’s chilly temperatures? Allowed but after a long wait.
Many a political prisoner in Maharashtra and Delhi has been struggling for access to basic necessities these last few month.
Read more

Stan Swamy gets a sipper, finally

The ‘inhumane’ treatment meted out to the 83-year-old Parkinson’s patient by the NIA and Taloja jail authorities had drawn a lot of flak from citizens.
Almost 50 days after his arrest, 83-year-old tribal rights activist Stan Swamy , who suffers from Parkinson’s disease, was provided a sipper by the Taloja Jail authorities.
Read more 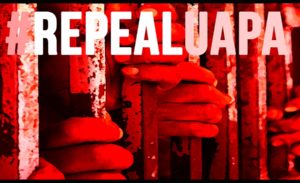 The Leaflet / by Mihir Desai

Preventive detention laws and anti-terrorism laws, that deviate from regular principles of criminal law, have a history of misuse. In his speech delivered at the KG Kannabiran Lecture 2020, Senior Advocate MIHIR DESAI argues that the time has come to sideline the dreadful UAPA due to the increased and ever more dangerous misuse of anti-terror laws. People are being arrested just for dissenting with the government and denied bail.
Read excerpts

The Maharashtra government and authorities in Mumbai’s Taloja central jail say Swamy, who is suffering from Parkinson’s disease, has been provided with all basic facilities, including a straw and sipper cup, since he was taken to the hospital ward within weeks of his arrival in prison.
Read more

After 83-year-old Father Stan Swamy moved the NIA Court seeking adequate facilities at the Taloja Jail as he is unable to drink water from glass due to medical reasons, a group of lawyers have sent straws and sippers for him. Stating that the authorities must ensure that the detention of persons at the jail must be ‘human’, the members of the Bar urged the Jail Superintendent of Taloja Jail to make arrangements for all inmates as per the jail manual who have special medical needs.
Read more

NPRD also appeals all disability rights organisations, activists to join this campaign and send sippers to Swamy.
Tribal activist Stan Swamy’s painful wait for a sipper cannot be tolerated any longer, said a prominent disability rights organisation that is planning to send the drinking aid to the jailed octogenarian, who is suffering from Parkinson’s disease.
Read more

The plight of Father Stan Swamy continues to draw outrage among disability rights groups and ordinary citizens. Over 100 straws and sippers have been sent to the Taloja Jail where he is lodged in as well as the National Investigation Agency office. The 83-year-old activist has Parkinson’s disease, a condition recognised as disabling under RPWD Act 2016.
Read more

The National Investigation Agency’s statement in court on Thursday that it would not be able to provide a sipper and straw to jailed activist Stan Swamy has prompted social media users around the country to take matters into their own hands and send these items to him themselves.
Read more

A Special NIA Court in Mumbai denied 83-year old Stan Swamy, suffering from Parkinson’s, booked under the UAPA Act, of basic amenities like a straw and a sipper.
Watch video

“… he was not arrested during the long investigation lasting more than 2 years itself shows that he was never seen as a flight risk or someone who would tamper with evidence”, reads the application.
83-year-old tribal rights activist and Jesuit priest, Father Stan Swamy has filed a bail application before the Special National Investigation Agency (NIA) court in Mumbai seeking release on bail from Taloja Central Jail where he has been lodged for his alleged involvement in the Bhima Koregaon case.
Read more

Tribal rights activist and priest Father Stan Swamy filed a fresh application on Thursday, requesting winter wear, a sipper cup and straw after the National Investigation Agency (NIA) informed the special court it had not confiscated Swamy’s straw and sipper cup. The matter, along with Swamy’s bail plea, will be heard next in December.
Read more

We Don’t Have Father Stan Swamy’s Sipper & Straw With Us, Says NIA

A Special NIA Court in Mumbai directed the concerned medical officer in Taloja jail to reply to the requirement of a straw and sipper filed by 83-year-old Father Stan Swamy, who suffers from Parkinson’s Disease after the National Investigation Agency expressed its inability to provide a straw and sipper for the Jesuit priest accused in the cast based violence at Bhima Koregaon.
Finally, Court directed the medical officer to reply to the requirement of straw and sipper along with winter clothes. The matter will now be heard on December 4.
Read more

Wait for straw, sipper gets longer for Stan Swamy, who has Parkinson’s disease & is in jail

The Print / by Apoorva Mandhani

Stan Swamy, in jail in connection with Bhima Koregaon violence, files fresh application seeking a straw and sipper after NIA denies seizing it. Matter will be heard on 4 December.
Stan Swamy, the 83-year-old Jharkhand-based Jesuit priest and tribal rights activist who was arrested by the National Investigation Agency (NIA) last month in connection with the Bhima Koregaon violence, will have to wait till December at least to get a straw and sipper cup which he needs as a Parkinson’s disease patient, as well as winter clothes.
Read more

A special National Investigation Agency court pulled up authorities of Taloja prison and the Mumbai Central Jail for delaying reports related to activist Anand Teltumbde, who is an accused in the Bhima Koregaon case, reported The Times of India.
The court made the remark after Teltumbde submitted that there had been no reply to a petition he submitted in August. Teltumbde had on August 28 approached the court with an application to get home-cooked food, and highlighted his health-related problems.
Following this, the court had instructed the Taloja Jail superintendent to submit a report and take him for medical tests. The prison officials were asked to submit a response by September 4, but the authorities have still not filed it.
Read more