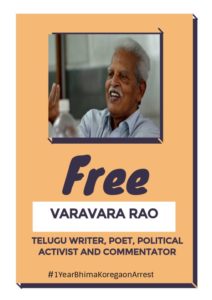 Varavara Rao (VV) was born in Warangal in 1940. He finished his MA in Telugu literature from Osmania University. He worked as a lecturer in several colleges and transformation towards revolutionary ideas started in Varavara Rao’s mind during his tenure in Mahabubnagar district.

Work
Varavara Rao has been writing poetry since 1957. Warangal was one of the first places to respond to the Naxalbari movement, which began in Bengal in around 1967. In 1969, with Varavara Rao as one of the driving forces, Warangal saw the rise of a literary group called Thirugubatu Kavulu (Rebel Poets), which associated itself with the armed struggle going on in Andhra’s Srikakulam district then.
Virasam was formed as a culmination of the Srikakulam struggle and Varavara Rao has been a part of its executive committee since its inception. As a part of Virasam, he toured Andhra Pradesh extensively, while continuing his literary endeavours.

Inspired by the proletarian Cultural Revolution on the world stage and the Naxalite politics on the national scene, he entered into an engagement with politics and literature that was to deepen in intensity and commitment over the next five decades. VV worked as a college lecturer until 1988, and spearheaded an energetic literary magazine, Srjana, for several decades. During his many trysts with life in jail as a “prisoner of conscience”, he translated the work of Ngugi Wa Ngugi wa Thiong’o (https://ngugiwathiongo.com/) (the Kenyan novelist, activist and theorist of postcolonial literature) into Telugu, and wrote his own prison diary, Sahacharulu (1990), which was translated into English as Captive Imagination. His varied literary endeavours of the past five decades were recently collected and published in a single volume.

He has around 15 poetry collections against his name. His thesis on ‘Telangana Liberation Struggle and Telugu Novel – A Study into Interconnection between Society and Literature’ is considered to be landmark in Marxist literary criticism in Telugu.

Cases
Varavara Rao was arrested in October 1973 under the Maintenance of Internal Security Act (MISA). He was also arrested during the Emergency and was kept under stringent scrutiny. Unlike other inmates who were released when the Emergency was lifted, Rao was arrested again at the entrance of the jail and kept imprisoned for an additional week.

He survived many attempts on his life post-Emergency.

He was among the 46 accused of conspiring to overthrow the Andhra Pradesh government in the Secunderabad conspiracy case and was sent to jail once again in 1985.

Rao was also an accused in the Ramnagar conspiracy case where he was alleged to have attended a meeting where the plan to kill Andhra Pradesh Police constable Sambaiah and inspector Yadagiri Reddy was hatched. He was finally acquitted of the charges after 17 years in 2003.

He went on to become an emissary for the People’s War Group in peace negotiations between the Andhra Pradesh government and Naxalites. After multiple rounds of talks failed, his organisation Virasam was banned. Following the ban of Virasam, Rao was arrested once again in 2005 under the AP Public Security Act and sent to Chanchalguda Central Prison in Hyderabad.  The case was struck down under the Public Security Act on 31 March 2006 and Rao obtained bails in all other cases.

He has been arrested four-times since the formation of the new Telangana state in 2014.

Rao’s name had surfaced in the investigation when Pune police arrested Surendra Gadling from Nagpur in June 2018, in connection with the Elgaar Parishad rally case. A letter was recovered from Gadling in which Rao complimented him on the success of attack launched by Naxalites in Surjagad area of Gadchiroli. He was arrested from his home in Hyderabad on Tuesday, 28 August 2018.

A Poet Against the State
The Poet as the Revolutionary