Hello and welcome to All Indians Matter. I am Ashraf Engineer.
Anand Teltumbde, one of the 16 accused in the Bhima Koregaon-Elgar Parishad case, finally walked out of prison on November 26 after his bail was upheld by the Supreme Court. Many experts opined that him having to wait two and a half years for bail was an abject failure of the judiciary. Speaking after his release, the scholar-activist said: “I am obviously happy to be released after 31 months for which I have been in prison. The sad part, however, is that we had to spend time in jail for years after being booked in a fake case…” The 73-year-old anti-caste writer had been in prison since 2020 under the Draconian Unlawful Activities (Prevention) Act, or UAPA.

Anand Teltumbde walks out of prison

Anand Teltumbde walks out of jail:‘Unfortunate how the case was put on us’

Elgaar Parishad accused Anand Teltumbde told reporters, “”I am happy to be released after 31 months, but it is so unfortunate the way the case was put on us.”
A day after the Supreme Court dismissed the National Investigation Agency’s (NIA) plea challenging his bail, Elgaar Parishad accused Anand Teltumbde was Saturday released from Taloja Central Prison in Navi Mumbai.
Read more

by Meera Sanghamitra / @meeracomposes (Nov 26, 2022):
From the day of arbitrary arrest (14th April) to the release on bail (26th Nov), Anand Teltumbde’s jail journey is indeed a historic one, challenging a State that violates the Constitution everyday! Zindabad to Rama tai, Prachi & everyone in the release campaign. #ScrapUAPA

by LeftWord Books (Nov 26, 2022):
All of us at LeftWord Books and May Day Bookstore are overjoyed that our author Anand Teltumbde is out on bail.
Fitting that it should happen on Constitution Day!

CPI(M) Puducherry (Nov 26, 2022):
We welcome granting of bail to Anand Teltumbde may more continue to be in jail under charges release all political prisoners.

by AILAJ_HQ (Nov 25, 2022):
The order of the SC dismissing NIA’s appeal against grant of bail to Anand Teltumbde in the 2018 Bhima Koregaon case is a step in the right direction.
All prisoners languishing behind bars for political dissent must be equally treated!

by Indian American Muslim Council (Nov 25, 2022):
Supreme Court of India confirms bail for scholar-activist Anand Teltumbde. We hope courts also free other prisoners of conscience who have been languishing in jails for years under trumped-up charges.
#FreeAllPrisonersOfConscience

The Supreme Court on Friday dismissed the special leave petition filed by the National Investigation Agency challenging the Bombay High Court order granting bail to Professor Anand Teltumbde in the Bhima Koregaon case. A bench comprising Chief Justice of India DY Chandrachud and Justice Hima Kohli however added that the High Court’s observations will not be treated as conclusive final findings at the trials.
Read more

Deciding not to interfere with the order of the Bombay High Court, the SC upheld Dr. Teltumbde’s bail
On Friday, a Supreme Court division bench comprising the Chief Justice of India (‘CJI’) Dr. D.Y. Chandrachud and Justice Hima Kohli dismissed a special leave petition filed by the National Investigation Agency (‘NIA’) challenging the order of the Bombay High court that granted bail to Dr. Anand Teltumbde, the 73-year-old Dalit scholar, academic and activist charged under the Unlawful Activities (Prevention) Act (‘UAPA’) for allegedly being a senior member of the banned organisation, the Communist Party of India (Maoist) (‘CPI (Maoist)’).
Read more

“We will not interfere”: CJI DY Chandrachud 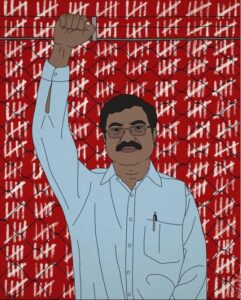 The Bombay high court on November 18 granted bail to Teltumbde noting that prima facie the only case made out against him relates to alleged association with a terror group and support given to it.
After the National Investigation Agency (NIA) on Tuesday moved the Supreme Court against the bail granted to scholar-activist Anand Teltumbde in the Elgar Parishad case, the top court agreed to hear the matter on Friday.
Read more

The National Investigation Agency has approached the Supreme Court against the Bombay High Court order granting bail to Professor Anand Teltumbde in the Bhima Koregaon case.
Solicitor General of India Tushar Mehta mentioned the matter before Chief Justice of India DY Chandrachud for urgent listing on Thursday. While granting bail on November 18, the High Court had suspended the order for one week.
Read more 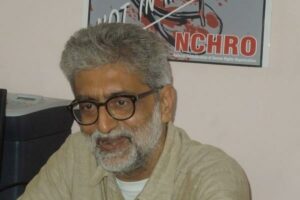 The Telegraph / by pti

This is for the first time that I saw so many police personnel and media persons in here, says villager.
A nondescript library in a village in Navi Mumbai, a satellite city of Mumbai, is suddenly buzzing with activity as police personnel stand guard amid mounted surveillance, but villagers, unaware about who Gautam Navlakha is, discuss in hushed tone about the “powerful” occupant of the ground-plus-one-storey structure.
Read more

Activist Gautam Navlakha walked out of prison on Saturday evening, November 19, and was taken to a building in Navi Mumbai where he will be living under house arrest.
His release from Taloja prison after more than two years came nine days after the Supreme Court earlier this month granted his plea seeking house arrest on medical grounds.
Navlakha walked out of prison around 6 pm on Saturday. A police team took him to a building in Belapur-Agroli area of Navi Mumbai where he would be staying.
Read more

The Supreme Court has allowed the activist accused in the Bhima Koregaon case to be shifted from jail on grounds of ill health and poor facilities in prison.
Activist Gautam Navlakha was on Saturday evening released from Taloja Jail in Navi Mumbai, where he had been lodged for more than two years, PTI reported.
After being released around 6 pm, he was taken to a premises in Belapur-Agroli area of Navi Mumbai, where he will be kept under house arrest, an unidentified police official told the news agency.
Read more

Activist Gautam Navlakha released from jail, to be placed under house arrest

More than a week after the Supreme Court’s order, Bhima Koregaon case accused Gautam Navlakha was Saturday released from Taloja Central Prison. He will now be placed under house arrest at a community hall in Navi Mumbai owned by the Communist Party of India (Marxist).
Read more

While Sudha Bharadwaj secured a ‘default bail’, Varavara Rao is out on medical bail. The order in Teltumbde’s case is significant, because for the first time in the case, a court has dealt with the merits of the allegations levelled.
Observing that there is “no proof or any material” to show that 73-year-old civil liberties activist and academic Anand Teltumbde had made international visits sponsored by the banned CPI (Maoist) organisation, the Bombay high court on Friday, November 18, granted him bail.
Read more

The court reaffirmed its order placing Navlakha in house custody, with additional security measures, within 24 hours of the pronouncement of the order.
On Friday, a division bench of the Supreme Court, comprising Justices K.M. Joseph and Hrishikesh Roy, dismissed the National Investigation Agency’s (‘NIA’) application to vacate the order of the bench, passed on November 10, which allowed Gautam Navlakha to be placed in house arrest for a period of one month under certain restrictions.
Read more

The Supreme Court on Friday dismissed the application filed by the National Investigation Agency seeking to vacate the order allowing the shifting of activist Gautam Navlakha to house arrest from the Taloja prison in Mumbai where he is lodged in connection with the Bhima Koregaon case.
A bench comprising Justices KM Joseph and Hrishikesh Roy also engrafted certain additional conditions for the house arrest of the septuagenarian, such as the sealing of the kitchen door leading to the exit point and the locking of the grills of the hall.
Read more

by Bar & Bench (Nov 18):
Gautam Navlakha hearing
Solicitor General (SG): The public library belongs to Communist Party
Justice KM Joseph: It is a recognised party. What is the issue?
SG: If it does not shock you, what can I say.
SC: No it does not shock us.

The Bombay High Court on Friday granted bail to former IIT professor and Dalit scholar Prof. Anand Teltumbde, booked under the Unlawful Activities (Prevention) Act in the Bhima Koregaon-Elgar Parishad case.
The court observed that prima facie offences under sections 13 (Punishment for unlawful activities), 16 (punishment for for terrorist act) and 18 (punishment for conspiracy) of the UAPA were not made out and only section 38 and 39 (membership and support to a terrorist were made out.
Read more

The court has stayed the order for one week to allow the NIA to approach the Supreme Court and appeal the decision.
The Bombay high court on Friday (November 18) granted bail to scholar Anand Teltumbde, an accused in the Elgar Parishad-Maoist links case. Seventy-three-year-old Teltumbde has been in Mumbai’s Taloja Central Prison since his arrest on April 14, 2020.
Read more

The operation of the bail order is, however, directed to remain in suspension for a week to enable the NIA to appeal.
On Friday, a division bench of the Bombay High Court comprising Justices A.S. Gadkari and Milind N. Jadhav granted bail to Dr. Anand Teltumbde, the 71-year-old Dalit scholar, academic and activist charged under the Unlawful Activities (Prevention) Act for allegedly being a senior member of the banned organisation, the Communist Party of India (Maoist) (‘CPI (Maoist)’). He is currently lodged at Taloja Central Jail, Navi Mumbai and is awaiting trial.
Read more

Thread by Bar & Bench (Nov 18, 2022)
#SupremeCourt to shortly hear separate applications moved by #BhimaKoregaon accused Gautam Navlakha, in which he alleged delay to implement SC’s order granting him #housearrest, and the NIA’s plea to cancel his house arrest due to bias in medical records among other grounds.

On Thursday, the Bench led by CJI, Justice D.Y. Chandrachud directed two applications, one filed by activist Gautam Navalakha and another to be filed during the course of the day by the National Investigation Agency, to be listed tomorrow before the Bench led by Justice K.M. Joseph
Last week, the Court had allowed Navlakha’s request to be placed under house arrest in consideration of his medical condition. However, the Special NIA Court at Mumbai yesterday refused to pass orders to execute the house arrest of Navlakha , after the NIA objected to the location of the house chosen by Navlakha.
Read more

The Telegraph / by Web Desk

The bench took note of submissions of a senior lawyer, appearing for the activist, that the apex court’s direction to keep him in house arrest has not been complied with so far.
The Supreme Court agreed to list for hearing on Friday a fresh plea of activist Gautam Navlakha, who has not been shifted to house arrest despite the apex court’s direction in the Elgar Parishad-Maoist link case.
Read more