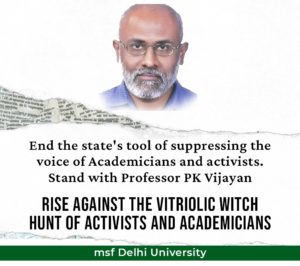 The professor is a English teacher at the University’s Hindu College and was summoned for an investigation by the NIA on August 14.
Three days ago, Delhi University Professor PK Vijayan was asked to appear before the National Intelligence Agency for an investigation into the Bhima Koregaon incident. Just a few weeks ago, another DU professor, Hany Babu was taken into custody by the NIA.
Read more

Delhi University’s Hindu College professor PK Vijayan has said that the National Investigation Agency (NIA) questioned him last Friday regarding his role in the Saibaba Defence Committee.
Prof Vijayan who teaches English in the institution said he is not at liberty to speak on what happened during the questioning, as he has been advised by his advocates not to do so but described the session ‘cordial’ and ‘civil’. “We (he and Prof. Rakesh Ranjan) were kept waiting for about 5-6 hours and questioned for the rest,” he said.
Read more 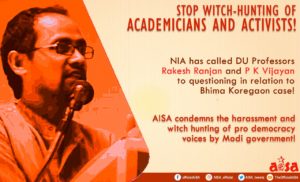 New Delhi: A group of activists and academics issued by Emeritus Professors, Faculty Members & Alumni of Centre for Economic Studies and Planning, JNU and Colleagues of Delhi University have released a statement in solidarity with Rakesh Ranjan, who was summoned for questioning by the National Investigation Agency (NIA) on August 14.
Read more / full solidarity statement

Stop the witch-hunt of academics and activists in the name of Bhima Koregaon!
Immediately release all political prisoners!
The Campaign Against State Repression (CASR) condemns the summons by the National Investigation Agency (NIA) to Dr. PK Vijayan and Rakesh Ranjan, faculty members in Delhi University, in connection with the Bhima Koregaon-Elgaar Parishad case yesterday.
Read full statement

The Telegraph / by Special Correspondent

Condemnation of ‘RSS-BJP regime’s increasing use of repressive laws and manipulation of investigation and judicial processes’
Two teachers of colleges under Delhi University were questioned by the National Investigation Agency on Friday in connection with the Bhima-Koregaon violence, days after the NIA acted against two other teachers of DU.
Read more

Say it is ‘legalized harassment’ in the garb of ‘investigation’
Students of economics professor Rakesh Ranjan, summoned by the National Investigation Agency (NIA) in the Bhima Koregaon case have strongly condemned the summons.
Read more

One the faculty members being questioned, P.K. Vijayan, had been targeted in an alleged surveillance conspiracy last year.
Mumbai: The National Investigation Agency (NIA), investigating the Elgar Parishad case, has issued summons to Prem Kumar Vijayan, who teaches English at Hindu College, Delhi University. Vijayan has been summoned to the agency’s Delhi office on August 14.
Read more

Stand in Solidarity with Prof. PK Vijayan, resist attack on our teachers
Prof. PK Vijayan, faculty at English Department in Hindu College, Delhi University is summoned by NIA under Amit Shah’s Home Ministry to appear before them on 14 August, in relation to Bhima Koregaon case. Recently, Prof. Hany Babu of DU was arrested in the case after an year of his witch hunting. Bhima Koregaon unveils the fascist face of the BJP-RSS state with all progressive voices being criminalized.
PK Vijayan is an eminent Marxist scholar and one of the foremost democratic voices in Delhi University. He have stood with the student movement all throughout. It is the duty of student movement to unite and resist the attack on our teachers and university spaces.
Stand with PK Vijayan, Resist fascist attack by Hindutva Brahminical forces!

By students and alumni of SRCC

We, the students and alumni of SRCC, stand in complete solidarity with Prof. Rakesh Ranjan. He has been summoned by the NIA for a hearing on 14th August, in relation with the nefarious Bhima Koregaon case. This is part of the on-going witch hunt of intellectuals and activists by forces attempting to stamp out every progressive and dissenting voice.
Read/sign statement

Please sign statement in solidarity with Prof. Vijayan
HANDS OFF OUR TEACHERS!
Rise in rage against NIA intimidation of Prof. PK Vijayan of English Department, Hindu College, DU.
We, the students, teachers and members of the academic community are alarmed by the summons issued to Prof. Prem Kumar Vijayan of Hindu College, Delhi University by the NIA to join the ongoing investigation into the Bhima Koregaon case on Friday, 14th August. Recently, Prof. Hany Babu of English Department, Delhi University had also been summoned similarly by the NIA and arrested under draconian UAPA charges in the expanding Bhima Koregaon witch hunt of progressive teachers, journalists, lawyers, cultural and social activists.
Read/sign statement