Four years after arrests in the Bhima Koregaon – Elgar Parishad Case, the National Investigation Agency has said that it will provide remaining copies of electronic evidence seized, but the trial in the case should go on.
Responding to pleas by lawyer Sudha Bharadwaj and journalist Gautam Navlakha to stay the proceedings or defer framing of charges until the clones copies are not provided, NIA claims they have yet to receive copies from the Forensic Science Laboratory.
Read more 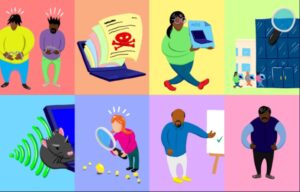 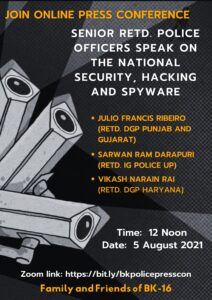 On a day when the Supreme Court heard petitions against the government’s refusal to inquire into the use of Pegasus spyware, three senior retired police officers addressed an online press conference raising serious concerns about the impact of surveillance and evidence planting. In the wake of clear proof of evidence planting emerging in the Bhima Koregaon – Elgar Parishad cases, as well as the ongoing Pegasus revelations, Julio Ribeiro (former DGP, Punjab), Vikash Narain Rai (former DGP, Haryana) and SR Darapuri (former IG Police, Uttar Pradesh), said such revelations have serious implications for the rule of law and for the functioning of the country’s police. They criticised the government’s failure to investigate these crimes, and also called for the release of those arrested in the Bhima Koregaon case. END_OF_DOCUMENT_TOKEN_TO_BE_REPLACED

Claims of evidence planted in device can be raised during trial: NIA to Bombay HC in Rona Wilson and Shoma Sen plea

“Much water has flown. Bail pleas have been heard and disposed of, they have even gone up to Supreme Court. The case is now posted for framing of charge and they want to stay the trial,” ASG Anil Singh argued.
The National Investigation Agency (NIA) told the Bombay High Court on Wednesday that the allegation by Bhima Koregaon accused Rona Wilson and Shoma Sen that evidence was planted in their electronic devices, is an argument which can be raised before the trial court.
Read more

… Arguing Wilson’s quashing petition under Article 226, Senior Advocate Indira Jaising submitted that FSL’s failure to respond to a specific question put by the then Investigating officer of the case: ‘whether Wilson’s hard disk was tampered with or not?’, indicates that their analysis is not reliable…
On Wednesday, Jaising submitted that the seizure of Wilson’s laptop was not secure as the ‘hash values’ of the electronic devices were not calculated. Moreover, his laptop was operated during the search in 2018, which was impermissible.
Read more

The National Investigation Agency (NIA) has opposed the petitions filed by Rona Wilson, accused in the Bhima Koregaon case, stating that it wasn’t maintainable because it entirely revolves around this theory of planting of evidence.
Wilson and other accused, Shoma Sen, have filed petitions in the HC seeking quashing of the case against them.
Read more

The Quint / by Anand Venkatanarayanan

An expert decodes Arsenal report—on planting evidence in activists’ devices—& its significance after Pegasus leaks.
In the light of Pegasus leaks, suggesting that Indian government used a spyware to snoop on politicians, constitutional appointees, journalists, and activists, the Bhima Koregaon case deserves fresh and sharp attention.
The Bhima Koregaon case (BKC) is a unique case in many aspects, but one aspect stands out – the planting of evidence through the use of malware as detailed by the Arsenal reports (Report one, two, three).
Read more