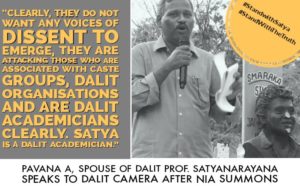 In collaboration with maraa, The Polis Project launched Profiles of Dissent – a new series centered on remarkable voices of dissent and courage in India and their personal and political histories, as a way to reclaim our public spaces. These are prominent writers, poets, activists, and human rights defenders who have been in prison, held under the Unlawful Activities (Prevention) Act. The profile features K. Satyanarayana who has been implicated in the connection with Bhima Koregaon investigation in relation to his father-in-law Varavara Rao.
Read more

By K. Satyanarayana and K.V. Kumaranath

Prof. K. Satyanarayana and K.V. Kumaranath released the statement above after being released by NIA and returning to Hyderabad.

The Mumbai unit of the NIA had summoned them a few days ago asking them to appear before it as a witness under Sections 160 and 91 of Criminal Procedure Code (CrPc).
Hyderabad: Revolutionary writer P Varavara Rao’s sons-in-law K. Satyanarayana and KV Kurmanath appeared before the National Investigation Agency (NIA) in connection with the Bhima Koregaon case this morning.
Read more

‘Not Sure Whether My Husband Will Return Home After NIA Questioning’, Says VV Rao’s Daughter Pavana

The NIA has summoned K Satyanarayana and KV Kumarnath for questioning in connection with the Elgar Parishad case.
The National Investigating Agency (NIA) is set to question two sons-in-law of revolutionary poet-writer Varavara Rao, the family says that the harassment at the hands of the state continues despite the deteriorating health condition of the incarcerated poet.
Read more

Statement by The English and Foreign Lanuages University Teachers´ Association 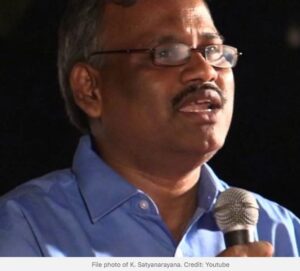 The News Minute / by TNM Staff

The Association has demanded that the state address the violation of human rights in an academic space.
Following the raids by the Pune police in many states on Tuesday, where they arrested poets, writers and activists, accusing them of being “Maoist sympathisers”, the English and Foreign Languages University Teachers Association has strongly condemned the arrest of Professor Satyanarayana. Satyanarayana, whose residence was raided on Tuesday morning, is an anti-caste activist and head of the Department of Cultural Studies in EFLU.
Read their full statement

K. Satyanarayana Says Will Move SC Against Pune Police’s Actions Against Him

A police team raided K. Satyanarayana’s house on August 28. While the search documents claimed the professor’s father-in-law Varavara Rao was living there, another Pune police team was raiding the house where Rao actually lives at the same time.
Days after the Pune police raided the house of 51-year-old professor K. Satyanarayana at the English and Foreign Languages University (EFLU) campus in Hyderabad, he has decided to move the Supreme Court against the “injustice and humiliation” he had to endure.
Read more