Poster by Campaign Against State Repression

Life partners of jailed human rights defenders Khalid Saifi, Hany Babu and GN Saibaba who gathered in national capital Delhi on Thursday under the banner of Campaign Against State Repression, demanded the immediate release of all political prisoners incarcerated under the Bhima Koregaon and CAA-NRC cases.
This event titled “conspiracy of conspiracy cases” was held to discuss the recent developments in Bhima Koregaon and CAA-NRC case where top intelligence officers have disclosed that there was no connection between the Elgaar Parishad event and Bhima Koregano violence, as well as multiple international forensic reports revealing that the evidence was planted on the BK accused.
Read more

Countercurrents / by Our Representative

Civil rights activists have alleged, quoting top intelligence officers as also multiple international forensic reports, that recent developments with regard to the Bhima Koregaon and the Citizenship Amendment Act-National Register of Citizens (CAA-NRC) cases suggest, there was “no connection between the Elgaar Parishad event and the Bhima Koregaon violence.”
Activists of the Campaign Against State Repression (CASR) told a media event at the HKS Surjeet Bhawan, New Delhi, that, despite this, several political prisoners continue to be behind bars on being accused under the anti-terror the draconian Unlawful Activities (Prevention) Act.
Read more 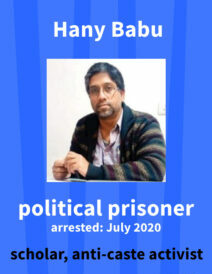 by Live Law / @LiveLawIndia (Jan 6, 2023):
[#BhimaKoregaon -Elgar Parishad Case]
#BombayHC is informed that DU Prof Hany Babu’s cataract surgery was successfully performed.
“We expect the jail officials to take the petitioner to the hospital for follow-up treatment. ” -J AS Gadkari.
Plea disposed of. 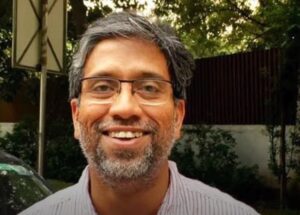 The Bench also allowed the accused to meet his family members while in hospital.
The Bombay High Court on Friday allowed Delhi University professor Hany Babu, an accused in the Bhima-Koregaon violence case, to undergo cataract surgery at his own cost, in Mumbai’s Saifee Hospital.
A division bench of Justices Ajay Gadkari and Prakash Naik while permitting him to undergo the surgery, ordered the Superintendent of the Taloja Central Prison to transfer him to Saifee hospital by Monday morning.
Read more

The Bombay High Court on Friday allowed Delhi University (DU) associate professor Hany Babu, accused in the Bhima Koregaon – Elgaar Parishad case to undergo cataract surgery at a private hospital in Mumbai.
A division bench led by Justice AS Gadkari directed Babu, currently lodged in Taloja Prison, to be escorted to the private hospital on Tuesday, further permitting hospitalisation for four days. During this time, he would also undergo diagnosis for upper abdominal pain and osteoarthritis.
Read more

The Bombay High Court also allowed the former Delhi University professor to meet his close family members during his stay in the hospital.
The Bombay High Court on Friday granted a temporary bail to former Delhi University professor Hany Babu, one of the accused persons in the Elgar Parishad case, to undergo cataract surgery, PTI reported.
A bench of Justices Ajay Gadkari and Prakash Naik passed the order. They also directed the Superintendent of the Taloja Central Prison to transfer Babu to Mumbai’s Saifee Hospital by December 19, according to Live Law.
Read more

Is it just their relentless opposition to State policies that gets the NIA’s goat, or is it also their privileged background?
Stone walls do not a prison make, nor iron bars a cage. Sometimes they do, even for the most creative minds.
Take Maharashtra’s Taloja Jail, on the outskirts of Mumbai. For the last almost three years, it’s been home to some of the country’s most valuable public intellectuals, and also the site of their steady deterioration. The Bhima Koregaon trial is yet to begin, but the 16 accused have already been punished, by the NIA that’s handling their case and the jail authorities.
Read more

In his plea made on Tuesday, he said that there is no reply from the jail’s superintendent despite the court’s direction to the authority to file one.
Following an application by civil rights activist and accused in Bhima-Koregaon case, Anand Teltumbde, on Tuesday, a special court has directed the Deputy Inspector General of police (DIG, Prisons) to look into the mosquito menace in Taloja prison as the jail superintendent has not complied with previous orders to take precautions to control the situation despite repeated directions.
Read more

by PantherAjay (May 27, 2022):
Jailed Shahir Sagar Gorkhe is not the only under trail prisoner who has been continually harassed and whose ‘Machchhardani’ stolen by the insolent jail administration. This is an attempt to condemn the unlawful treatment meted against the under trial prisoners and to safeguard their rights. Following is the account of a similar incident that was faced by another imprisoned writer and poet Ramesh Gaichor translated from the original written in Marathi. 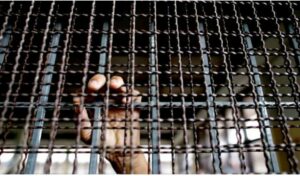 The Leaflet / by Rohin Bhatt

It is time that the right to health becomes a reality, in letter and spirit to every person, irrespective of their incarceration status. This will have to be done through a wide scale, public health campaign, and rapid recruitment of qualified doctors with training in evidence-based medicine that can provide adequate care to prisoners.
It has been good law in India since Bandhua Mukti Morcha versus Union of India (1983) that the right to health is a fundamental part of right to life under Article 21 of the Constitution…
However, what happens when you are a political prisoner in India? These rights are vitiated, and the process becomes the punishment.
Read more

● Video: The Conditions of Prisoners in Indian Jails

By All India Lawyers’ Association for Justice – AILAJ / March 2022 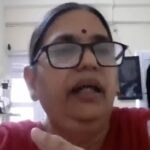 en | 1:21:23 | 2022
The huge number of undertrials, the overcrowding, and the disproportional numbers of Dalit, Muslim and Adivasi prisoners are part of the prison problem in India.
We are joined by Adv. Sudha Bharadwaj for a discussion on the Conditions of Prisoners in Indian Jails.
Watch video

Try hugging your child with one arm
Political leaders on Saturday shared the stage with relatives and friends of activists imprisoned in terror cases, listening to how bail remained a mirage for years and police prevented the accused even from hugging their children in court.
Besides the release of their loved ones, most of the speakers demanded a repeal of the Unlawful Activities Prevention Act (UAPA) which made bail difficult to obtain, and alleged that an “undeclared emergency” had turned the country into a “police state”.
Read more