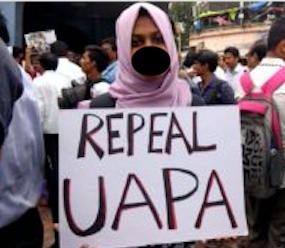 The most recent challenge to the UA(P)A is a petition filed that makes the case that vague language and arbitrary provisions violate allow governments to abuse powers and violate the fundamental rights of the citizens
The Unlawful Activities (Prevention) Act, 1967, is being challenged in court as having “manifestly arbitrary” provisions and a very broad definition of “unlawful activity” that has a stifling impact on free expression. The Supreme Court, that first took up the matter September 26, 2022 will hear the matter on October 18.
… The petition argues that the UAPA’s provisions are “arbitrary and perverse, since they represent a condemnation of all democratic expression,” and that governments are abusing them “to target any and all kinds of dissent.” The petition was filed through attorney Rahul Bhatia.
Read more

The petitioner has argued that the law is being misused by the government as a political tool to target all forms of dissent.
The Supreme Court on Monday said it will hear a petition challenging the constitutional validity of the Unlawful Activities (Prevention) Act on October 18, Live Law reported.
Under the stringent provisions of the Unlawful Activities (Prevention) Act, investigation agencies get 180 days to probe a case, as against 60-90 days under ordinary criminal law.
… Umar Khalid, Sharjeel Imam, Siddiqui Kappan and Stan Swamy are some of the activists who have been accused under the draconian law.
Read more