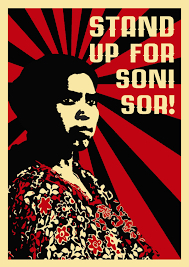 Mumbai: A fortnight ago, tribal rights champion Soni Sori found herself in quite a conundrum…
While the Jagdalpur team of the NIA refused to take Sori’s health condition seriously, its Bombay team, investigating the 2018 Elgar Parishad’s case, cancelled its scheduled questioning last week. Sori, who was one of the many guest speakers at the Elgar Parishad event… was to be questioned by the NIA. A team of officers had reportedly traveled to Dantewada but decided to return on finding out about her health condition. The team spoke to Sori on the phone instead and has rescheduled a visit to Dantewada to the coming week.
Read more