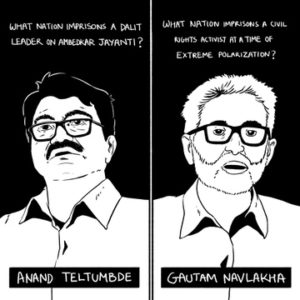 In a Sunday hearing, a special court in Mumbai denied default bail to activist Gautam Navlakha who is currently lodged at Taloja jail. Court also allowed NIA’s application seeking custody of Navlakha for ten days in order to question him in the Bhima Koregaon case …
Moreover, Judge Kothalikar accepted NIA’s plea seeking extension of 90 to 180 days to file chargesheet against Navlakha and Dr. Anand Teltumbde, also accused of being a part of the maoist movement and inciting the caste based violence that took place on the 200th anniversary of the battle of Bhima Koregaon through speeches at the Elgar Parishad conclave a day earlier on December 31, 2017.
Read more

The Caravan / by Nileena MS

On the evening of 11 July, the 81-year-old poet Varavara Rao called his wife, Hemalatha, from the overcrowded Taloja Central Prison in Maharashtra, sounding incoherent and delirious, according to a press release circulated by his family …
Families and lawyers of others who have been imprisoned in connection to the Bhima Koregaon case have pointed out they are barely able to communicate with the inmates during the pandemic. At least four of the 11 undertrial prisoners have pre-existing medical conditions that make them vulnerable to the novel coronavirus.
Read more

The Supreme Court on Friday adjourned an appeal moved by State of Maharashtra against the Delhi High Court order setting aside Gautam Navlakha’s transit remand.
A bench of Justices Arun Mishra, S. Abdul Nazeer & Indira Banerjee allowed the State Government to file a compilation earmarking list of dates along with a convenience in the appeal which has contended that the habeas corpus petition filed by Navlakha before the High Court is not maintainable. For this purpose, the State Government has gone on to cite two Supreme Court judgements – State of Maharashtra v. Tanseem Rizwan Siddique and Saurabh Kumar v. Jailor, Koneil Jail.
Read more

The National Investigation Agency’s actions were designed to undermine the jurisdiction of the Delhi court.
For India’s higher judiciary, two elements of court proceedings have come to be regarded as sacrosanct. As courts of record, the High Courts and the Supreme Court pay close attention to precedent: rules established in previous legal cases play a strong role when a later case with similar circumstances is decided.
Read more

The special National Investigating Agency (NIA) court on Friday rejected the interim bail plea filed by Telugu poet P Varavara Rao and activist Dr Shoma Sen, booked for their role in the Elgar Parishad case… Meanwhile, the special court on Friday heard arguments on the plea of civil rights activist Gautam Navlakha, one of the accused in the case, for bail, as the agency failed to submit charge sheet within a stipulated time frame… Another accused lawyer Arun Ferreira and human right activist Rona Wilson booked in the case too have approached the court for release from the jail.
Read more

June 25th, 2020: On this day in 1975, the then-Indian Government imposed the State of Emergency in India, suspending all fundamental rights and commencing one of the darkest periods of Indian democracy. Today, after a span of forty-five years, we the people of India find ourselves in a similar situation, living in a de facto state of emergency, which has not been officially declared, where scores of ordinary citizens to who dared to criticize the government are being arbitrarily arrested under draconian laws meant only for rarest cases of international terror. The Chhattisgarh chapter of the People’s Union for Civil Liberties is observing this day as the Anti-Emergency Day –to demand the release of arrested human rights workers, and to renew our pledge to uphold the Constitution of India, with all its promises of freedom and equality, in its true spirit. END_OF_DOCUMENT_TOKEN_TO_BE_REPLACED 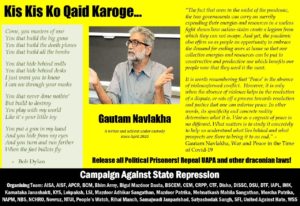 The National Investigation Agency (NIA) has moved an application to once again obtain the custody of civil rights activist Gautam Navlakha who was arrested in the Elgar Parishad case after he surrendered at the agency’s Delhi office on April 14…
Meanwhile, Navlakha has sought bail as the agency has failed to file a charge sheet within 90 days.
Read more

Gautam Navlakha’s petitions are scheduled for hearing on June 26, 2020.

Last month, activist Gautam Navlakha was shifted from Tihar jail in Delhi to Mumbai and has since been kept in the school as new inmates are being quarantined before being shifted to the Taloja central jail to avoid an outbreak inside.
Journalist and activist Gautam Navlakha, arrested in the Elgaar Parishad case, informed his lawyers and family members on Saturday that a school in Kharghar set up as a temporary jail where inmates were being kept was in a ‘deplorable condition’.
Read more

As many as 350 Taloja inmates crammed into six classrooms being used as quarantine facility.
Activist Gautam Navlakha, incarcerated in the Bhima-Koregaon case, is being kept in deplorable conditions in a quarantine facility in Taloja for the last three weeks, his partner Sahba Husain said on Sunday.
Read more 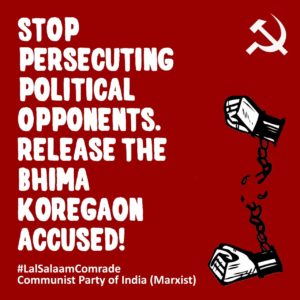 We are herewith releasing the full text of the letter addressed to the Home Minister, Amit Shah by CPI(M) Polit Bureau Member, Brinda Karat. This pertains to the inhuman treatment of human rights activists arrested in connection with the Bhima Koregaon case. The letter was sent today.
Read more

The Supreme Court has today asked the National Investigation Agency to provide Gautam Navlakha’s Counsel with a copy of its petition, while adjourning the matter till July 6. The interim order of the Court ordering stay on the Delhi High Court’s order will continue till then.
Read more