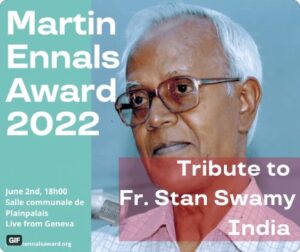 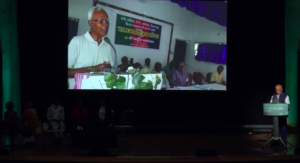 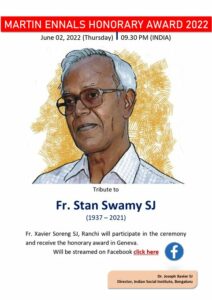 By The Indian Social Institute (June 1):
Fr. Stan Swamy will be honoured on 2 June 2022. (Time: 09.30 pm India time) in Geneva with the Martin Ennals Honorary Award-2022. Fr. Xavier Soreng SJ, Ranchi will participate in the ceremony and receive the honorary award.

The Martin Ennals Foundation announced today that a special, post-humous homage will be made to Father Stanislas Swamy during the 2022 Martin Ennals Award Ceremony, next June 2nd at 18h CET.
Father Stan (1937-2021), as he was better known, was a Jesuit priest and activist who founded several organizations to promote human rights in Jharkhand state, India. He dedicated much of his work to advance the rights of Adivasi communities – indigenous tribes of India who are known as forest dwellers and protectors of the environment.
Read more

Father Swamy worked most of his life to empower the  Adivasi community
Human Rights Defenders Alert – India (HRDA) on June 2, 2022 will award martyred human rights defender Father Stan Swamy ‘2022 Martin Ennals Award’ for his exemplary work protecting and defending the rights of Adivasis in Jharkhand.
The 84-year-old Jesuit priest was a beloved activist till his final days in Taloja jail where he suffered a cardiac arrest. He had been jailed under trumped up charges in the Bhima Koregaon case, despite the fact that he was nowhere near the location of the violence!
Read more

● Framed to Die – The Case of Stan Swamy 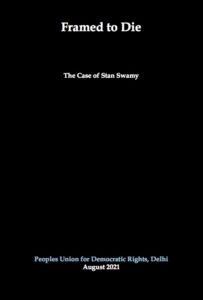 The Hindi version of the memoir, written by Ranchi-based Jesuit priest James Toppo, would be released on the occasion.
The birth anniversary of Father Stan Swamy would be observed with the installation of the Jesuit priest’s bust and release of two books at Bagaicha, a training and social action centre, in Namkum, Ranchi, on April 26.
Read more

Video: Unveiling of the Bust of Stan Swamy & Release of Three books 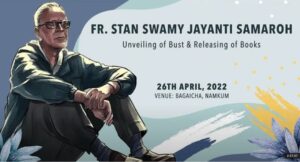 Unveiling of the Bust of Stan Swamy & Release of Three books
– The Memoirs of Stan Swamy (Hindi Translation)
– If Not Now, When?
– Fr Stan Swamy: A Maoist or a Martyr?
Watch video

Peaceful resistance was the cornerstone of Stan’s work, and that is why the state failed in breaking his spirit.
It may take time to get the Bombay High Court to clear Jesuit Father Stanislaus Lourduswamy’s name in the so-called Elgar Parishad case.
And it may take longer to get the Vatican machinery to launch the formal process to grant Sainthood to the 84-year-old priest, whose work among the Adivasis of central India and the poorest of the poor earned him the ire of mine-owners, state governments, and finally the central government.
Read more 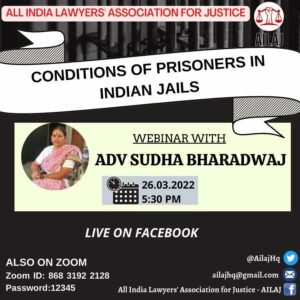 The huge number of undertrials, the overcrowding, and the disproportional numbers of Dalit, Muslim and Adivasi prisoners are part of the prison problem in India.
We are joined by Adv. Sudha Bharadwaj for a discussion on the Conditions of Prisoners in Indian Jails. 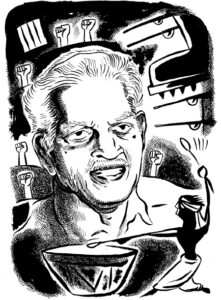 PUCL salutes Sudha Bharadwaj and her fight for Justice! 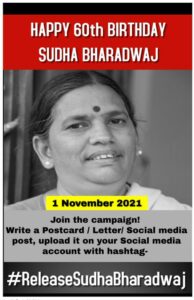 by Chhattisgarh Bachao Andolan (CBA) Raipur
When the government doesn’t have an answer to the storm of questions raised against it, it resorts to arresting those speaking the truth fearlessly. Shame! #ReleaseSudhaBhardwaj #FreeAllPoliticalPrisoners #RepealUAPA

by NAPM India
#SudhaBharadwaj is one of the finest trade unionists & public spirited lawyers who has always taken on unjust & powerful forces. We wish Sudha real liberation on her 60th. #3years of her incarceration & that of all political prisoners is a shame, a huge loss & unforgivable crime.

by Meera Sanghamitra
Working silently, yet resiliently for over three decades amidst adivasis, workers & oppressed sections in #Chhattisgarh, #Sudha has inspired an entire generation to understand the combined value of legal activism & on-ground unionizing. Happy birthday, Comrade. You are a star.

by Meena Kanasamy
History will remember her as a fierce lioness who stood up to this regime.

Chitrangada
It’s her 60th birthday tday & she is spending it in prison, where she has been since 3+ yrs, without bail or trial.
The Bombay HC finished hearing her last bail plea on 4th Aug. Still no ruling. 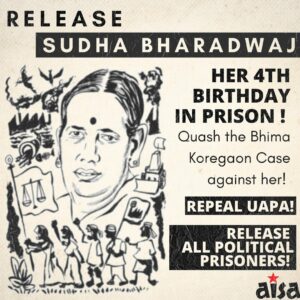 Sudha Bharadwaj goes through her 4th birthday in Jail for fighting for the rights of people! While Criminals like Anurag Thakura and Kapil Mishra are not only Roaming free but are being awarded Ministries by the Government! #ReleaseAllPoliticalPrisoners #releaseBK16 #RepealUAPA

Today human rights lawyer & activist Sudha Bharadwaj will celebrate her 60th birthday in prison She was arrested on fabricated charges 3 years ago and has been denied bail. Call on the govt to #FreeSudhaBharadwaj immediately: https://web.civicus.org/India1121 | #StandAsMyWitness 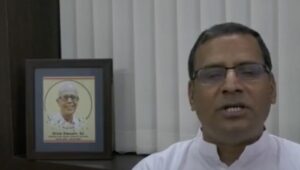 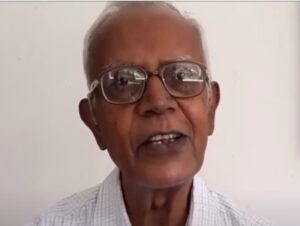 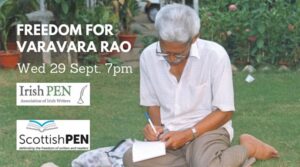 By Irish PEN and Scottish PEN

Join Irish PEN, Scottish PEN, Wales PEN Cymru and guests as we share readings, translations and updates on the case of revolutionary Indian poet, Varavara Rao.
This event was chaired by Professor Ignatius McGovern and featured a rare opportunity to hear from Rao’s nephew, Venugopal Nellutla, who published ‘The Making of Varavara Rao: An Intimate Portrait by a Nephew’ in 2020. The event includes a variety of poetry and prose readings from Áine Ní Ghlinn, Professor Bashabi Fraser, Leela Soma, Ifor ap Glyn, June Considine and Kate Ennals.
Watch video

By Dr Meena Kandasamy (Oct 1)
Rama Ambedkar at a gathering in Bombay today demanding release of #BhimaKoregaon prisoners. She spoke on the sudden change in the media narrative of the BK riots in 2018 and the conspiracy that ensued culminating in the arrest of Anand Teltumbde and 15 others. 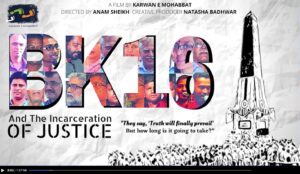