Have We Seen the Last of Conspiracies?

There is a need to now explain and create a sensible narrative about how conspiracies become narratives that favour the ruling dispensation.
The idea that “conspiracy theories” can explain politics is often rubbished, but now, after the recent revelations by Washington Post that a plot was allegedly hatched to compromise the laptop of jailed activist Rona Wilson, it has become imperative to see how conspiracies have been systematically used by the current regime.
Read more

What is striking about recent developments in India is the manner in which the media, both legacy and social, have become entangled with the politics of the day. In fact, they have become the site upon which politics plays out.
Whether it is the raid conducted by the Enforcement Directorate on the offices of NewsClick, the ongoing counter-narrative to the farmer protests conducted by the BJP’s troll armies, the spiriting away of journalists by the police, the battles against tweets put out by Greta and Rihanna, the Twitter spats, or the ever-tightening surveillance net cast by the government on media operations, what is at stake, as Shoshana Zuboff reminded us in a different context, is “sovereignty over one’s own life and authorship of one’s own experience.”
Read more

Leading human rights and constitutional lawyer Karuna Nundy applauded the Supreme Court for acting out its self-professed role as ‘sentinel on the qui vive’ and protecting personal liberty when ordering Arnab Goswami’s release on interim bail – but had some tough questions about the consistency of the court’s approach.
She noted that even though the Republic editor-in-chief had not only damaged people’s reputations by calling them terrorists and anti-nationals, and actually influenced the taking of state action against them – from Umar Khalid to the Bhima Koregaon accused – it was still a good thing that his case was heard on a priority basis by the apex court.
Read more 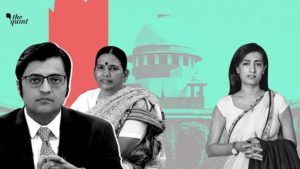 Supreme Court advocate Karuna Nundy explains why there are concerns over the consistency with which the apex court will apply its order granting Arnab Goswami interim bail, with Sudha Bharadwaj’s case a prime example.
Watch video 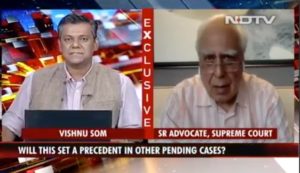 The Supreme Court’s order on Wednesday in the Arnab Goswami case has major implications beyond just this one instance. Justice Chandrachud observed, “Forget Arnab Goswami for a moment, we are a Constitutional court…. If we as a Constitutional Court do not lay down law and protect liberty, then who will?” He went on to add, “If we don’t interfere in this case today, we will walk on path of destruction. You may differ in ideology but Constitutional courts will have to protect such freedoms…” The remarks come at a time when thousands languish in jails in want of bail. These include the old and the infirm, like 81-year-old Varavara Rao accused in the Bhima-Koregaon case and Father Stan Swamy who suffers from Parkinson’s.
After the Supreme Court’s observations that ‘constitutional courts have to protect freedoms’, will this set a precedent in other pending cases as well? We speak to senior advocate and Congress MP Kapil Sibal who was in Supreme Court in connection with this case.
Watch video 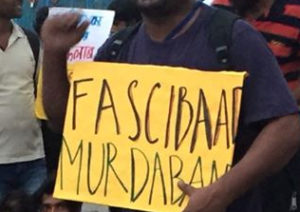 Concern over Arnab’s Health in Jail. What about Activists Like Varavara Rao and Stan Swamy?

Was it freedom of expression when Arnab Goswami called activists anti-national?

India’s prime time ‘hyper entertainer’, Arnab Goswami, was arrested by the Maharashtra police for charges of ‘abetment of suicide’ of an architect and his mother, who has worked for the so-called ‘number one’ channel, but did not get paid …
In fact, Fadnavis should face an independent commission for upturning the entire Bhima Koregaon violence case into a conspiracy theory and then putting so many intellectuals in jail.
Read more

Dramatic scenes flashed on India’s TV screens on Wednesday morning as Arnab Goswami, the editor-in-chief of the Republic TV network, was arrested from his home in Mumbai.
Goswami has played a big part in changing India’s media landscape, pioneering a loud, jingoistic brand of journalism that does not shy away from flaunting its leanings towards the Bharatiya Janata Party…
Sudha Bharadwaj, an accused in the Bhima Koregaon case, has explicitly blamed Goswami for making “false, malicious and defamatory allegations” against her by sharing a “fabricated letter”.
Read more

The Maharashtra Police Is Getting Dangerously Politicised and Partisan

The Wire / by Ashish Khetan

The police has shown no compunctions in going after the critics of the political outfit in power – be it the left-leaning academics under the BJP’s rule or a rightwing media head under the present Shiv Sena-led coalition…
Param Bir Singh, the current police commissioner, has a troubling track record of leading investigations that suit the political party in power. In August 2018, while he was serving as the additional director general of police (law and order) under the BJP-Shiv Sena government, Singh held the infamous press conference in which he released the ‘conclusive evidence’ against the human rights activists and academics accused in the Bhima Koregaon case of waging war against the nation, even as the matter was being heard by the Supreme Court.
Read more

From Kashmir to Gujarat, Journalists Continue to Get Arrested. But It Hasn’t Angered Our Netas Like Arnab’s Arrest

The arrest of Republic TV’s Arnab Goswami has been condemned by ministers, many calling it an attack of press freedom. But will they continue their outrage when the next journalist is assaulted in Delhi or arrested in Gujarat?
Read more

The Times of India / By PTI

MUMBAI: Opposing the interim protection from arrest granted to activist Gautam Navlakha by the Bombay High Court, the Maharashtra government on Thursday invoked the Naxal attack in Gadchiroli, saying he is accused of being a member of “such a group“.
Read more

The Pioneer / By Rajesh Kumar

Following the arrest of human rights defender Sudha Bharadwaj and four others on 26 October 2018, there is an imminent threat of false charges being brought against Dalit activist and human rights defender, Degree Prasad Chouhan. The police have already implicated the defender by name in a fake letter produced by them on 31 August 2018, which they claim was written by advocate Sudha Bharadwaj. There is a clear attempt by the police to smear the human rights defender as a Maoist militant and draw a false link between Degree Prasad Chouhan and the Bhima Koregaon violence which took place in January 2018.
Read more

… “The ‘urban Maoists’ who live in air-conditioned homes in the cities, look clean and whose children study abroad, remote-control the adivasi children in the Naxal-dominated areas,” Modi said. “I want to ask the Congress why it supports the ‘urban Maoists’ when the government takes action against them and come to Bastar and speak against Naxalism,” he said.
Read more

The Isro case is the latest reminder of what the police-media nexus can do.
Read more

NEW DELHI: The Bombay high court (HC) on Monday admonished the Maharashtra police for holding a press conference to discuss the recent arrest of five activists even though the matter was sub judice.
Read more

Peoples Union for Democratic Rights, Delhi (PUDR) strongly protests the accusation by the Maharashtra police claiming that the PUDR is a frontal organisation of the CPI (Maoist) party. This is a blatant attempt to threaten and restrict the functioning of one of India’s oldest civil rights organisations.
Read more