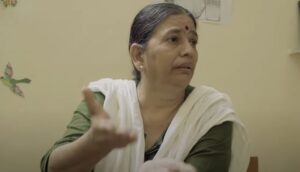 The trade unionist and lawyer sits down with Manisha Pande in Mumbai.
Sudha Bharadwaj loves mathematics, wonders whether she gave her daughter the “right” kind of childhood, and became a lawyer when she was 40 years old.
“Had I not become a lawyer,” she says, “I don’t think I would have been very easily accepted as a leader.”
Sudha was released from Mumbai’s Byculla Jail in December last year after spending three years in prison. She was arrested in connection with the #BhimaKoregaon violence and was repeatedly denied bail until December 1. She was also dubber an ‘urban naxal’ by TV channels that made little attempt to understand her work. Sudha says she now wants to go to her real home, to Chhattisgarh, where she’s lived since the 1980s.
In this interview, she talks about her childhood in Bilaspur and her educational journey, culminating in IIT Kanpur. Her mother, a #JNU professor, helped shape the ideology of this self-proclaimed #Marxist – though she confesses her mother had many “apprehensions” – who began working with trade unions at the age of 25.
Working with people on the ground, Sudha is only too aware of how “alien” the judicial process is to the majority of India’s population. “The notification comes out in the gazette. You are somewhere, miles away in a village which is not even accessible, and nobody even tells you about it,” she says. She also thinks it’s important for young lawyers to cut their teeth by representing the most marginalised.
In Byculla jail, where she remembers she once saw #RheaChakraborty, Sudha continued her work, trying to secure legal aid for those imprisoned with her. She believes in the importance of a “united front” – the farm law protests are an example, with people holding differing ideologies coming together – and worries that the lack of this unity gives rise to dogma.
Watch 13 min video clip here

by newslaundry (Oct 21, 2022):
‘He was never an opportunist in his politics.’ @Sudhabharadwaj talks about labour law leader and founder of the #Chhattisgarh Mukti Morcha Shankar Guha Niyogi and the actual movement that led to his assassination.
Watch video clip (3:46min)

by newslaundry (Oct 20, 2022):
In conversation with @MnshaP @Sudhabharadwaj details the #Sarkeguda encounter case in #Chhattisgarh’s Bijapur district in which unarmed villagers including minors were killed, and the legal battle that ensued.
Watch video clip (4:30min)

by newslaundry (Oct 19, 2022):
‘So much money goes to defend the state.’ Speaking with @MnshaP, @Sudhabharadwaj
talks about legal aid in India and how there is no level playing field for citizens.
Watch video clip (2:34min)

Watch the full interview (for subscribers only) here