The Wire / by Nandini Sundar

The Bharatiya Kisan Union (Ekta Ugrahan) decided to mark December 10, International Human Rights Day, by remembering several prominent activists arrested under the Unlawful Activities (Prevention) Act (UAPA), especially those arrested in the name of Bhima Koregaon, and the protests against the Citizenship (Amendment) Act…
Mahesh Raut, one of the youngest of those arrested in the Bhima Koregaon case, is a graduate of TISS and was a PM Rural Development Fellow in Gadchiroli.
Read more 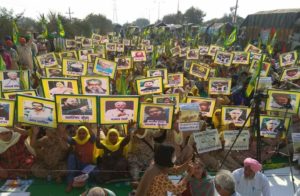 The Bombay High Court on Wednesday reserved judgment on the appeal filed by Gautam Navlakha, accused in the Bhima Koregaon case, challenging the order of NIA court granting extension of time under the Unlawful Activities Prevention Act( UAPA) for filing chargesheet.
Senior Advocate Kapil Sibal, appearing for Navlakha, submitted that the extension application under Section 43D(2) of UAPA was filed by the NIA on the the 110th day of his custody. Since the application was filed beyond the period of 90 days, Navlakha was entitled to get default bail, Sibal submitted.
Read more 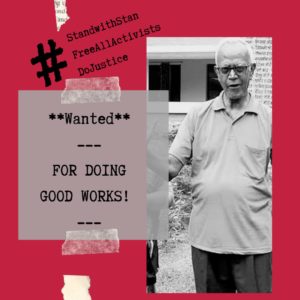 The central agency said Swamy cannot be given bail as it was yet to complete investigating emails and other digital evidence gathered at the time of his arrest.
The National Investigation Agency on Monday opposed the bail plea filed by tribal rights activist Stan Swamy, and alleged that the 83-year-old was part of the alleged conspiracy to instigate violence in 2017, PTI reported.
Read more

Father Stan Swamy had moved a plea seeking opportunity to be heard if a decision is taken to transfer him to any other prison. Swamy has been lodged in Taloja Central Jail in Navi Mumbai since his arrest in October…
The court was also informed about the application by co-accused Gautam Navlakha seeking from jail authorities to provide him five books per month in Taloja prison. After hearing submissions, the court granted NIA to respond to the pleas and posted further hearings on December 21.
Read more

Stan Swamy likely to be shifted to Arthur Road Jail

Swamy’s advocate had made a plea on December 4, seeking that Swamy not be shifted from Taloja Jail without their being heard.
Octogenarian tribal rights activist Stan Swamy may be shifted out of the Taloja Central Prison in Navi Mumbai to Arthur Road Jail in the city. The Taloja jail superintendent, in a report, informed the court on Monday that while the jail authorities did not plan to shift him presently, considering his age and ailments, they were likely to move him to Arthur Road Jail, which had government hospitals nearby.
Read more 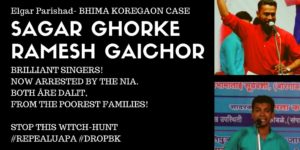 Along with the songs, the agency has also relied upon evidence from 2011 and 2012 and has claimed that the activists were in touch with absconding Naxal leader Milind Teltumbde.
Singing parodical songs against the BJP and Prime Minister Narendra Modi has been presented as one of the grounds for arresting singers and activists of the cultural troupe Kabir Kala Manch (KKM) in the Elgar Parishad case. In its response filed in the Bombay high court against the bail application moved by the vocalists of KKM, Sagar Gorkhe (32) and Ramesh Gaichor (38), the National Investigation Agency (NIA) has cited their songs which critique Narendra Modi and certain BJP policies as one of the grounds for arrest.
Read more

After jail refuses to give activist Gautam Navlakha his glasses, Maharashtra orders inquiry

Taloja Jail to Gautam Navlakha’s partner Sahba Husain: Resend glasses, we will accept it this time

Authorities at the Taloja jail have asked civil liberties activist Gautam Navlakha’s partner Sahba Husain to resend the new pair of spectacles she had sent for him, which they had refused to accept earlier, assuring her they would accept it this time.
Read more

After Stan Swamy struggled for his sipper, jailed Gautam Navlakha can’t get his spectacles

Navlakha was arrested in April for his alleged connection with the Bhima Koregaon case.
Gautam Navlakha, nearly 70, patient of several ailments, had his spectacles stolen on November 27. Close to blind without his glasses, he was not even permitted to call his home for a replacement until three days later, but even that call proved futile.
Read more

A List of Activists, Scholars and Scribes Whose Personal Liberty Remains at Judiciary’s Mercy

The Wire / by Ismat Ara and Sukanya Shantha

On September 7, following sustained interrogation at the National Investigation Agency’s office in Mumbai, two activists of the Kabir Kala Manch – Sagar Gorkhe and Ramesh Gaichor – were arrested for alleged connections to the 2018 Elgar Parishad case. Days later, another young cultural activist of the group, Jyoti Jagtap, was arrested too…
The Wire has put together a list of cases where activists and journalists arrested in the past years have struggled either in securing regular hearings, or in having their basic human rights protected, or both. Their situations put the Supreme Court’s assertion on “personal liberty” during Goswami’s bail hearing in harsh perspective.
Read more

Stan Swamy vs Arnab Goswami: Are activists fighting a losing battle? Whither justice?

It is time one raised pertinent questions over the courts denying bail to Fr Stan Swamy, who was arrested under the Unlawful Activities (Prevention) Act (UAPA), and granting it to Arnab Goswami, editor-in-chief of the Republic TV, arrested under the charge of abetting suicide of Avay Naik, who ended his life in 2018. It is travesty of justice that a human rights activist is not only denied bail but is also made to wait for weeks to hear a response to his legitimate request for a straw to drink water, while Arnab Goswami walks free.
Read more

The NIA, in its Elgar Parishad charge sheet, alleged that Navlakha was working as a link between Pakistan’s ISI and the CPI-Maoist.
The National Investigation Agency (NIA) believes are links between Kashmiri activist Khurram Parvez and activist Gautam Navlakha, who was chargesheeted in the Elgar Parishad Bhima Koregaon case, sources said on Wednesday.
Read more 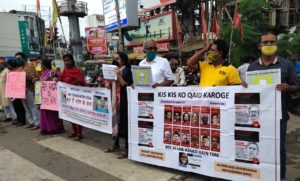 The seven accused Anand Teltumbde, Gautam Navlakha, Hany Babu, Sagar Gorkhe, Ramesh Gaichor, Jyoti Jagtap and Stan Swamy have been charged for criminal conspiracy among other offences under the IPC and under sections of the Unlawful Activities Prevention Act (UAPA).
The court noted that in view of the aforesaid allegations and considering the material available on record, it finds that there is prima-facie material on record against the accused persons to take cognizance of the offences. Hence, cognizance is taken.
Read more