Times of India / by Vishwas Kothari 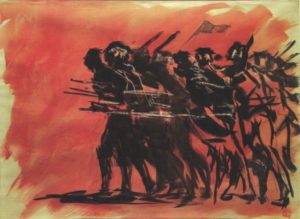 The Leaflet / By Nihalsing B Rathod

BHIMA KOREGAON PART IV
January 2019 was expected to offer some respite to the first set of arrestees in the Bhima Koregaon case relating to the caste violence that broke out in Bhima Koregaon village on January 1, 2018. The prosecution demand for the extension of time to file a charge sheet against the first set of arrestees was found to be illegal, perverse and contrary to the law of the land. While most of the population had fallen for a media trial, a single bench of the Bombay High Court mustered the courage to call a spade a spade. However, it was soon to be overruled by the Apex Court, crushing all hopes and sending a wave of shock across the legal fraternity.
Read more

The Indian Express / By Chandan Haygunde

The commission, constituted by the state government to probe into the causes of January 1, 2018, Koregaon Bhima violence, heard the case in Mumbai on June 19 and 20.
Read more

The first application was filed by the defence lawyer in December 2018. Then, in March, defence lawyers again filed an application seeking the cloned copies of the digital information, under Section 207 of the Code of Criminal Procedure.
Read more

The Leaflet / By Nitya Chakraborty

Govt move against NDTV and Lawyers Collective are strong indicators

While the Prime Minister Narendra Modi in his second avatar is projecting himself as a new mascot of tolerance and reconciliation, his government agencies have been taking up one by one the institutions which represent dissenting voices in both media and the legal profession. In the three week period since Modi took the oath as the PM for the second time on May 30, two prominent  independent voices of the country, NDTV Ltd among the television media and Lawyers Collective, have been targeted by the government agencies for actions which are old and which have already been dealt with by the concerned institutions.
Read more

People’s Union for Civil Liberties is shocked at the lodging of an FIR against the Lawyers Collective, its President and senior lawyer, Anand Grover and other office bearers by the Central Bureau of Investigation (CBI). …
He is currently an acting member of the Global Commission on Drug Policy and is a member of the UNAIDS Reference Group on HIV and Human Rights while Ms. Jaising was part of the team of lawyers for the accused in the ongoing Bhima Koregaon case as well as the case against Kolkata Police Commissioner Rajeev Kumar, where she successfully fought the plea of the CBI to seek his custodial interrogation.
Read full statement

The country will never forget that infamous night of June 25/26, 1975, when the then Prime Minister Indira Gandhi had a state of emergency declared all over the country. During that dark chapter of the country’s history which lasted for a 21-month period till March 21, 1977, civil liberties were suspended, freedom of speech and expression was totally muzzled, political opponents of the Government and those who protested the emergency were imprisoned and human rights violations by those in power were the order of the day!
Read more

The Hindu / by Sonam Saigal Mumbai

All nine activists arrested and booked for cases related to the Bhima Koregaon violence have written to Maharashtra’s Governor Ch. Vidyasagar Rao appealing, “if we really want democracy to function as per the Indian Constitution then all political prisoners should be released.“
Read more

PUNE: A special UAPA court on Monday directed the forensic science expert to prepare images of cloned copies of the electronic evidence seized in the in the Elgar Parishad case on June 21.
Read more