… From June 2018, ten of the most brilliant minds in the country pursuing the rights of man, found themselves in the tragicomic situation of the six men arrested in the Stalin cigar joke. Unfortunately for them this was a Kafkaesque reality which stared them in the face.
Read more 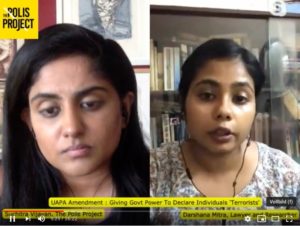 Suchitra Vijayan speaks to lawyer Darshna Mitra about the UAPA act, its long and violent history of weaponizing National security concerns to crush dissent, and what the recent amendments mean for the future of India as a constitutional republic.
Watch video

DNA Samwad this week tried to understand if there’s indeed an environment of fear & intolerance as claimed by some well-known personalities in a letter to the PM. The panelists comprising political leaders & social media experts from both sides of the ideological spectrum debated on the subject
Read more

en | 8:21 min | 2019
The Wire / By Beyond The Headlines with Siddharth Varadarajan
The new Bill will allow the NIA to wreak havoc on India’s federal system. But what’s most dangerous is the amendment that will allow the government to declare not just organisations as terrorists – but individuals as well.
Watch video 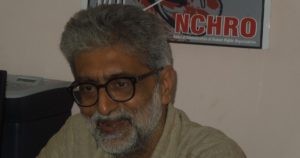 The Bombay High Court on Friday reserved its verdict on activist Gautam Navlakha’s plea seeking to quash a first information report filed against him for alleged links with Maoists. Navlakha was among five activists arrested last August in connection with the Elgar Parishad and Bhima Koregaon case.
Read more

The Unlawful Activities Prevention Act, 1967 (UAPA) was enacted by the Indira Gandhi government as a statute to prevent, curb and punish any ‘unlawful activity’. Such activities were, loosely speaking, seditious activities or such other activities against the territorial integrity and sovereignty of India.
Read more

Home Minister Amit Shah gave a strong message in the Lok Sabha on Thursday: Under the garb of ‘social activism’ and ‘ideological movement’, Maoism — especially ‘urban Naxalism’ and violence against common man, villagers and tribals under its pretext — won’t be tolerated at any cost.
Read more

Two months after the Supreme Court upheld the Bombay High Court order granting him bail, Konnath Muralidharan, … was released from Yerwada Central Jail on Tuesday. In a free-wheeling conversation with Mirror, the man who was arrested by the Maharashtra Anti-Terrorism Squad on May 8, 2019, along with along with his alleged courier — Ismail Hamzaa (29), delved into country’s judicial system, his stay at Yerwada and experience with the jail administration, the new-found obsession with “urban Naxalism” and the government’s efforts to silence his voice.
Read more

The Pune Police on Wednesday told the Bombay High Court that activist Gautam Navlakha and the Maoist groups he was allegedly associated with were in touch with militant group Hizbul Mujahideen and Kashmiri separatist leaders, PTI reported. The court was hearing Navlakha’s plea seeking to quash a first information report filed against him for alleged links with Maoist.
Read more

Nagpur: Justifying detention of Naxal sympathizers Vara Vara Rao and lawyer Surendra Gadling for their alleged role in a case of arson wherein around 80 vehicles were torched at Surjagarh mining site in Gadchiroli in 2016, Maharashtra government on Tuesday informed that more names of Maoists and their sympathisers could be revealed as the probe progresses.
In an affidavit submitted to the Nagpur bench of Bombay high court, the government justified the extension of investigation period and the duo’s detention due to non-receipt of e-mails from Yahoo, the web services provider company.
Read more