While Hemant Soren, just after assuming the office of the chief minister of Jharkhand, withdrew the Pathalgadi sedition case in the maiden cabinet decision, the Maharashtra chief minister Uddhav Thackeray, even after being in office for some time, has so far not initiated the process to withdraw the Koregaon sedition case.
Read more

A leading newspaper recently published sections from letters that the Elgaar-Parishad accused have written to family members and acquaintances from their current state of incarceration. The letters pulsate with various emotions of those behind bars, but one element that does seem to shine through is a continued concern for their less-fortunate fellow-beings.
Read more

Police have accused 19 people in the case, including nine arrested activists, five alleged underground members of CPI(M), four residents of Pune and a resident of Mumbai …
The case will be heard next on January 1, 2020.
Read more 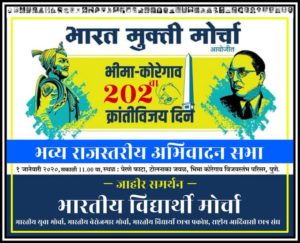 PUNE: The Pune rural police and Pune district administration are equipped with precautionary measures like internet shutdown as police officials prepare to tackle potential law and order situations in the district’s Bhima Koregaon area on January 1, 2020. The day marks 202 years since the battle of Bhima Koregaon was fought between the Peshwas and the British East India Company army which comprised local Mahar population.
Read more

Chargesheet will be filed after the approval of govt.
Pune rural police are in the final stages of investigating the case related to the violence in Koregaon Bhima in which Sambhaji Bhide and Milind Ekbote have been named as accused, SP Sandip Patil said on Sunday.
Read more

Addressing the 12th conclave of All India Democratic Women’s Association (AIDWA) at Byculla, Karat accused the Centre of undermining the Constitution and dividing the people in name of caste, creed and religion to serve its “devious larger agenda of (setting up) a theocratic state”. …
“The basic principle of a secular country must be separation of religion from politics… Even today, men and women who fought for the rights of the oppressed and marginalised, like (activist) Sudha Bharadwaj, are in jail in the name of being urban naxals. The state government should withdraw all (Elgaar Parishad) cases,” she added.
Read more 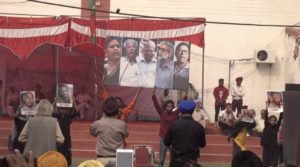 The BJP Government, within the first few months of its re-election, passed several legislations that are detrimental to Indian constitutional values and federal structure. India’s democracy has only weakened since the BJP’s coming to power, as they’ve relentlessly worked to consolidate power, weaken regional autonomy, and suppress dissent.
Read more

Decision comes after three labs in the country failed to get anything from the damaged disk.
The Pune police will take forensic help from the US Federal Bureau of Investigation (FBI) to retrieve data from a damaged hard disk seized last August from an accused in the January 2018 Elgar Parishad case, sources said on Wednesday.
Read more

Maaysha, Sudha’s daughter: “If fighting for the rights of adivasis, fighting for workers and peasants, fighting against repression and exploitation and giving up one s whole life for them is being a naxalite then I guess naxalites are pretty good.”

“The 6th Annual Harvard Law International Women’s Day Portrait Exhibit showcases the astounding contributions of women around the world to the areas of law and policy. The honorees — each of whom were nominated by HLS students, faculty or staff — are powerful voices in their respective fields, whether they are sitting on a high court bench, standing in front of a classroom, or marching in the streets.”

Or whether they are sitting in jail.

Advocate Sudha Bharadwaj is a 2019 honoree of the Harvard Law International Women’s day exhibition and is sitting in a jail cell in Pune. How did these conflicting positions come about?

Sudha grew up to illustrious parents, and spent the first part of her life as an American citizen. In the next 30 years of her life, she worked tirelessly in Chhattisgarh Mukti Morcha (CMM) as a trade unionist and eventually as a lawyer after the CMM, hamstrung in their legal battles by unscrupulous lawyers, found in her the courage and integrity needed to challenge powerful opponents in the courtrooms.

Sudha was instrumental in rebuilding the PUCL group after the arrest and incarceration of its then-President, Dr. Binayak Sen. During this time, she was appointed as the General Secretary of People’s Union for Civil Liberties (PUCL) and worked on issues of human trafficking and attacks on minorities. She also assisted families of victims of human rights violations looked upon as casualties in the conflict zone of Bastar and supported journalists and activists who dared raise their voices and pen against the State excesses in Bastar. She was elected recently as Vice President of the Indian Association of Peoples’ Lawyers (IAPL) and was active in campaigns against attacks on Dalit and human rights lawyers in Chhattisgarh and facilitated an IAPL fact-finding into it.

Sudha was arrested from her Faridabad home which she was sharing with her daughter, Maaysha. During this time, she was a Visiting Professor at the National Law University Delhi, taking Seminar Courses on tribal rights, land acquisition, and the Fifth and Sixth Schedules. This year she was to have taught “Law and Justice in a Globalising World”. Sadly, and ironically, she can’t teach the class as she is in jail. The loss, the students inform us, is all theirs.

Her daughter Maaysha, has in several letters candidly brought to fore Sudha’s tireless spirit and her commitment to her work, “If fighting for the rights of Adivasis, fighting for workers and peasants, fighting against repression and exploitation and giving up one’s whole life for them is being a Naxalite then I guess Naxalites are pretty good.”

Guneet Ahuja, Advocate, Delhi, in an open letter writes about Sudha, “On my first meeting with Sudha ji, I asked her about the competing narratives regarding the condition of indigenous communities in Bastar. Her reply left a deep impact on me: “For a pedestrian on a narrow lane, the car driver is causing the trouble. For the car driver, the pedestrian is the nuisance. Your perspectives change based on where you are placed.”

“If you try to be safe and in the middle, you will never succeed.”
Sudha, The Wire

Sudha Bharadwaj Speaks – A Life in Law and Activism 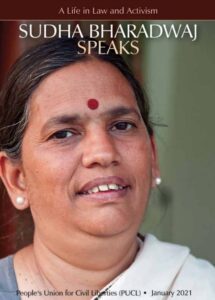 “When the victory drum started
beating
In the heart of the masses
You mistook it for a person and
trained your guns
Revolution echoed from all
horizons.”

Being thrown into jail is nothing new to the famous Telugu poet Varavara Rao. He has faced at least 25 cases in the last 45 years. His story can be understood through the history of these arrests and the power of his writings, his poetry, his teaching career and his political understandings and analysis of power and oppression, and the path to liberation.
Varavara Rao, or VV was born into a middle class family in Chinna Pendyala, Warangal District, Andhra Pradesh in 1940. He started publishing his poetry at age 17, in 1957, but got interested in revolutionary theory while working as a lecturer at Mahabubnagar. It was during this time that he founded a literature and poetry group called Sahithee Mithrulu and a non-political journal named Srujana to eventually join the Tirugubadu Kavulu (Rebel Poets), who were sympathetic to the armed struggle going on in Srikakulam.
During this time, VV founded the Virasam or Viplava Rachayitala Sangham (Revolutionary Writers’ Association), an association banned by the Andhra Pradesh government in August 2005. The ban was later struck down by the AP High Court in November 2005.
VV, now 74, has published 15 poetry collections of his own, besides having edited a number of anthologies. His poetry has been translated into almost all Indian languages and have appeared in Malayalam, Kannada, Hindi and Bengali. His thesis on ‘Telangana Liberation Struggle and Telugu Novel – A Study into Interconnection between Society and Literature’ published in 1983 is considered to be one of the finest works of Marxist critical studies done in Telugu. While in prison he translated Kenyan writer, Ngũgĩ wa Thiong’o’s prison diary ‘Detained’ and his novel ‘Devil on the Cross’ into Telugu. He also wrote his own prison diary Sahacharulu (1990), which was translated into English as Captive Imagination.
VV was first arrested under the infamous Maintenance of Internal Security Act (MISA) in Andhra Pradesh, in 1973. He was then arrested during Emergency and was re-arrested at the entrance of the jail and kept imprisoned for an additional week when the Emergency was lifted. He survived many attempts on his life post-Emergency.
He was among the 46 accused of conspiring to overthrow the Andhra Pradesh government in the Secunderabad conspiracy case, and was sent to jail once again in 1985. He was also an accused in the Ramnagar conspiracy case where he was accused to have attended a meeting where the plan to kill two Andhra Pradesh Police constables was hatched. He was finally acquitted of the charges after 17 years, in 2003.
He remains a staunch opposer of neo-liberal globalisation and specifically the globalisation policies adopted by Chandrababu Naidu’s government in the ’90s. He went as an emissary for the People’s War Group in the peace negotiations between the Andhra Pradesh government and Naxalites. After multiple rounds of the talks failed, Virasam was banned only to be reinstated later. Following the banning, Rao was arrested once again in 2005 and was released in 2006. He has been arrested four-times since the formation of the new Telangana state in 2014.
VV has faced at least nine cases under the Arms Act of 1959 and the Explosive Substances Act, 1908 over the last four decades. In perhaps the most ridiculous case, he was charged with distributing bombs to ensure the success of a strike against the custodial death of a Radical Students Union activist in 1985. In response, Varavara Rao wrote a memorable poem, titled :

WHO IS VARAVARA RAO?

Varavara Rao (VV) was born in Warangal in 1940. He finished his MA in Telugu literature from Osmania University. He worked as a lecturer in several colleges and transformation towards revolutionary ideas started in Varavara Rao’s mind during his tenure in Mahabubnagar district. END_OF_DOCUMENT_TOKEN_TO_BE_REPLACED