A special court on Tuesday rejected the temporary bail pleas filed by civil activists Shoma Sen and Varavara Rao – accused in the Elgar Parishad case, on the grounds of the coronavirus pandemic.
Special NIA judge RR Bhosale observed while rejecting the bail pleas that the charges against the accused under the Unlawful Activities Prevention Act (UAPA) are serious and the UAPA was not covered under the government notification for release of prisoners.
Read more

Others seek directions to jail authorities for permission to talk on phone since prison visits are stopped.
Citing the spread of coronavirus, poet P Varavara Rao and retired professor Shoma Sen, among the nine persons accused in the Elgaar Parishad case, have sought temporary bail on medical grounds from a special court. The court Monday heard the arguments on their bail pleas. An order in the matter is likely to be passed Tuesday.
Read more

ACTIVISTS SAY THEY ARE VULNERABLE TO COVID-19

While Varavara Rao says he has respiratory problems, Shoma Sen says she has high blood pressure; a special court to pass order today … Activist and lawyer Sudha Bhardwaj, who has been in jail since August 2018, had also filed an application for bail, but the National Investigation Agency stated it had not received a copy of her application.
Read more

A total of 130 lawyers have written to the Chief Minister of Maharashtra, State Home Minister and Chief Justice of Bombay High Court expressing grave concern regarding the safety of “thousands of individuals incarcerated in prisons and other settings of detention such as observation homes, special homes, children homes, detention centers, borstal homes, etc” in the midst of the Coronavirus pandemic.
Read more

No transport has been arranged for those who are released, while inmates still in prison fear for their health.
Mumbai: Even as the Maharashtra state government has slowly begun releasing incarcerated persons on parole and interim bail as a safeguard against the spread of the coronavirus pandemic, fear and desperation has gripped those languishing in the jail.
Read more

“COVID-19 outbreak an occasion to look at overcrowded prisons in country.”
A group of activists and intellectuals has sought bail or parole for political prisoners lodged in various jails.
In a letter to the Central and State governments, eminent persons such as writers Arundhati Roy, K. Satchidanandan and Meena Kandasamy, journalist B.R.P. Bhaskar and academics Dilip Menon and Benjamin Zachariah pointed out that the COVID-19 outbreak was also an occasion to look at the overcrowded prisons in the country.
Read more

INTELLECTUALS APPEAL FOR RELEASE OF PRISONERS

New Delhi: About two dozen intellectuals, writers and academics of the country have made an urgent appeal to the government to ease the over-crowded prisons in view of the outbreak of Covid19 and also in keeping with the recent Supreme Court directive. They have sought release on bail or parole of at least some of the prisoners including political detenues from across the country.
Read more

The Supreme Court has already directed the state governments to consider granting bail to remand prisoners, accused of committing crimes punishable with a maximum of seven years imprisonment.
Former Delhi University Professor GN Saibaba, Poet Varavara Rao, Dr Shoma Sen, Sudha Bharadwaj and several others including Padma and Veeramony in Tamil Nadu are in prison — either awaiting trial or are political prisoners of the state.
Read more 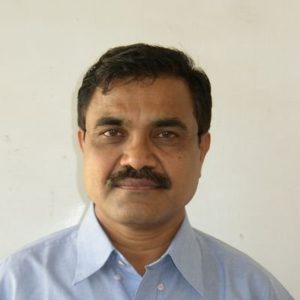 The Caravan / by Prachi and Rashmi Teltumbde

“As we look into our parents’ eyes, we see only pain”

… On 16 March, our father’s fate for the next few years was decided by the Supreme Court of India. The state lays in wait to incarcerate him on 6 April—a fact that we never imagined we would be speaking or writing about.
Since we heard the verdict, it feels like life has come to a halt, even as each day whizzes by in a deluge of calls and visits from well-wishers offering their sympathies and support. Sleepless nights and tired eyes have become routine occurrences.
Read more

Teltumbde, accused in the Bhima-Koregaon case under the UAPA, claims that the entire case against him is fabricated. On March 16, the SC gave him three weeks to surrender. In conversation with Asiaville, the noted scholar said that the Bhima-Koregaon arrests are a deliberate attempt to trap noted civil rights activists opposed to the BJP’s ideology.
Read more 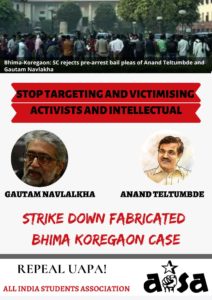 … Teltumbde and Navlakha are among those academics, activists, and lawyers who have been accused of involvement in the Bhima Koregaon violence, and being Maoists.
Others who have been accused and arrested for this under the draconian Unlawful Activities (Prevention) Act (UAPA) include Sudha Bhardwaj, Vernon Gonsalves, Sudhir Dhawale, Barbara Rao and Surendra Gadling.
Read more

Statement for Dr. Anand Teltumbde and Gautam Navlakha:
We, the undersigned (organizations and individuals) protest the impending arrest of Professor Anand Teltumbde and Gautam Navlakha and strongly condemn the attempt to malign their status as two of India’s foremost civil rights activists and public intellectuals today. END_OF_DOCUMENT_TOKEN_TO_BE_REPLACED

The apex court said the prisoners convicted of or charged with offences having jail term of up to seven years can be given parole to decongest jails.
New Delhi: The Supreme Court on Monday directed all states and Union Territories to set up high-level committees to determine the class of prisoners who could be released on parole for four to six weeks to avoid overcrowding in jails so as to safeguard against the spread of the coronavirus pandemic.
Read more