“He is stable as of now and is being evaluated. He had dizziness, which seems to have been a vertigo attack,” a senior hospital doctor said.
A special court has directed Mumbai’s JJ Hospital to submit a medical report on the health conditions of poet Varavara Rao, who was arrested in the Elgaar Parishad case.
Read more

It is deeply disturbing that 81-year-old poet Varavara Rao has been denied bail and has now been admitted to a hospital in Mumbai. Reports suggest that the prison in Taloja, Navi Mumbai, where he was lodged, has several Covid-19 patient. The family and friends of Varavara Rao have protested in Hyderabad, as they were not even allowed to visit him.
Read more

The New Indian Express / by IANS

Varavara Rao’s wife Hemalatha and daughter Pavana staged a three-hour-long protest at home, holding placards for release of the 80-year-old who was arrested in November 2018.
HYDERABAD: Revolutionary Telugu poet and writer Varavara Rao, who is in judicial custody in Maharashtra in the Bhima Koregaon case, has been admitted to JJ Hospital at Mumbai, officials said on Friday.
Read more

The subcommittee also questioned India’s use of UAPA to silence activists such as Safoora Zargar, Khalid Saifi, Meeran Haider and Sharjeel Imam, among others.
The European Parliament Subcommittee on Human Rights has written to Union Home Minister Amit Shah expressing concern about the recent arrests of activists Anand Teltumbde and Gautam Navlakha by the National Investigative Agency, and urged India to immediately release all political prisoners in view of the coronavirus pandemic. The activists are accused in the Bhima Koregaon case.
Read more

A Special court in Mumbai on Friday rejected the interim bail application filed on behalf of tribal rights activist and lawyer Sudha Bharadwaj arrested in relation to the caste based violence that took place at Koregaon Bhima in Pune on January 1, 2018. The 58-year-old Bharadwaj is currently lodged in Byculla women’s jail where an inmate has already tested positive for Covid-19.
Read more

In her interim bail plea filed on medical grounds, Bharadwaj had said that she is at a high risk of contracting the virus in prison and in her present medical condition, it would be ‘life-threatening’.
A SPECIAL court in Mumbai on Friday rejected the interim bail application of activist Sudha Bharadwaj arrested in the Elgar Parishad case. Bharadwaj (58) is lodged in Byculla women’s jail where earlier this month an inmate had tested positive for Covid-19.
Read more

Taloja Jail authorities said Rao was being treated at the medical facility within the jail, but his condition did not improve for three days.
Varavara Rao, the 81-year-old Telugu poet, an accused in the Elgar Parishad case, was admitted to JJ Hospital in Mumbai on Thursday, the Hindustan Times reported.
Read more

The bail applications filed on medical grounds of Varavara Rao and Shoma Sen will be heard on June 2. 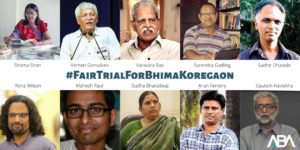 By Peoples Union for Democratic Rights

People’s Union for Democratic Rights is aghast at the National Investigating Agency (NIA) surreptitiously whisking away Gautam Navlakha from the Tihar Jail to Mumbai on 25 May 2020, without informing his lawyers or his family. 67-year old Gautam Navlakha was arrested by the NIA in the Bhima Koregaon matter, the infamous case that has become the vehicle to arrest human rights activists: journalists, academicians and lawyers critical of government actions.
Read more

In the matter pertaining to the bail plea of Gautam Navlakha, the Delhi High Court has directed National Investigation Agency to furnish the complete copy of the proceedings in the application for issuance of production warrants moved before the Special Judge (Mumbai), for its consideration.
Read more

Navlakha has been sent to judicial custody and will be lodged at Taloja jail near Mumbai. The Wire has reported that an inmate recently died there of COVID-19.
New Delhi/Mumbai: In a move that took his lawyers and family by surprise, the noted civil liberties activist Gautam Navlakha was shifted by the National Investigation Agency from Delhi to Mumbai on Monday and remanded to judicial custody by a special NIA court till June 22.
Read more 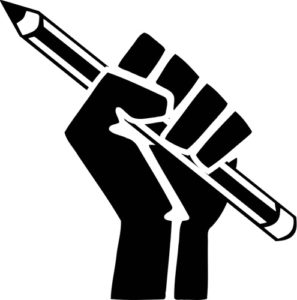 HYDERABAD: Leaders of the Indian Journalists Union (IJU) and Telangana State of Union of Working Journalists (TSUWJ) on Wednesday requested the Maharashtra government to consider releasing writer Varavara Rao on parole, keeping in mind his health condition and COVID-19 situation in the State.
Read more