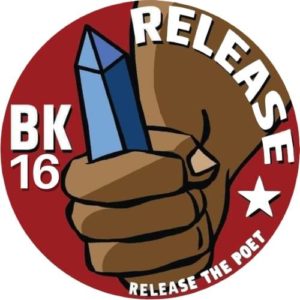 The Leaflet / by Manya Saini

Poet-Activist Varavara Rao’s extended judicial custody amid severe medical concerns has brought into question the rights of accused persons awaiting trial. Leading newspapers have pressed upon the need for judicial reform and argued that courts must come forward to protect the fundamental rights of citizens that are threatened by draconian laws like sedition and UAPA.
Read more

The Telegraph / by editorial board

The momentum generated by these verdicts needs to be taken forward to kindle an informed debate on judicial reform.
A fair investigation is one of the prerequisites of justice. The infirmities in two separate investigations that were exposed and castigated by the courts in two recent judgments merit attention. The Bombay High Court granted conditional bail to the poet, Varavara Rao, infirm and an accused in the Elgaar Parishad case, observing that the National Investigation Agency had kept him in custody without framing charges for an extended period of time.
Read more

Bail as right: On bail to Varavara Rao

Laws, however stringent, cannot be allowed to trump basic rights.
n granting bail for six months to poet Varavara Rao in the Bhima Koregaon case on medical grounds, the Bombay High Court has affirmed the principle that even the stringent provisions of an anti-terrorism law are not invincible before a prisoner’s constitutional rights.
Read more

Sharper Fights Ahead – Statement in view of VV’s Interim Bail

People’s Poet Varavara Rao’s interim (medical) bail granted by Mumbai High Court is a small but vital breakthrough, which was long overdue, is indeed an outcome of people’s rejection of state atrocities – but leaves no space for any self-satisfaction for them, who are unceasingly fighting in defense of VV and other victims of Bhima Koregaon-Elgar Parishad case.
Read more

The Times of India / by Shruti Ganapatye

With the Bombay high court granting bail to ailing activist Varavara Rao in the Bhima-Koregaon case on Monday, there is a renewed hope among other accused about similar relief coming their way.
Top lawyers, some of them representing the accused in the case, said though bail is difficult to secure in Unlawful Activitities Prevention Act (UAPA) cases, Rao’s case, where bail was granted on health grounds, has set a precedent.
Read more 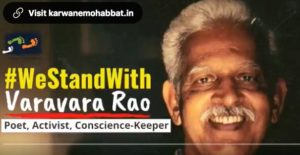 Investigations by Arsenal Consulting, a global digital forensics consulting company, have revealed that evidence had been planted in the activist Rona Wilson’s computer, raising larger issues of unethical surveillance and motivated targeting of individuals.
Rona Wilson, the New Delhi-based activist who was arrested in June 2018 for his alleged connections with banned extreme Left organisations, has steadfastly maintained that the evidence against him is fabricated and the charges are false.
Read more 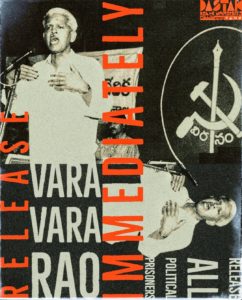 The octogenarian slipped into dementia during his time in prison, thereafter believing that his wife was dead.
Varavara Rao was incoherent on the phone. The president of Viplava Rachayitala Sagham (Revolutionary Writers’ Forum) spoke in Hindi instead of Telugu, his mother tongue, in which he has penned many poems.
“Her body was taken to the mortuary. Many people visited,” Rao said.
P Hemalatha, his wife, patiently listened to him during the five-minute-long phone call in June 2020 from Taloja Central Prison, Maharashtra, even as she was unsure of what he meant.
Read more

The Bombay High Court on Monday granted bail on medical grounds to 81-year-old ailing Telugu Poet Dr Varavara Rao, an accused in the Elgar Parishad-Bhima Koregaon case.
The High Court observed that it was a “genuine and fit” case for granting relief in view of the advanced age of the petitioner and inadequate facilities at Taloja jail hospital. The bench added that if it denies relief to Rao, it will be abdicating its constitutional duties as a protector of human rights and right to health covered under Article 21 of the Constitution.
Read more

“We feel that with the condition of the under trial, it would be inappropriate to send him back (to jail),” the Bench of Justices SS Shinde and Manish Pitale ruled.
The Bombay High Court on Monday granted bail to 82-year-old Bhima Koregaon accused Dr. Varavara Rao on medical grounds.
The Court has granted the octogenarian bail for a period of six months.
The order was passed by a Bench of Justices SS Shinde and Manish Pitale in two separate pleas – one by Rao praying for bail and the other by his wife Pendyala Hemlatha seeking the Court’s intervention in view of the alleged violation of his fundamental right to health.
Read more

The Bombay High Court Monday granted six months medical bail to 82-year-old Dr. PV Varavara Rao, an accused in the Bhima Koregaon case. Dr. Rao is facing charges under the unlawful Activities (Prevention) Act’ (UAPA).
A division bench of Justice SS Shinde and Manish Pitale said it would have abdicated its duty in protecting his fundamental rights if it had denied bail to the ailing Telugu poet.
Read more

Bar and Bench / by Neha Joshi

Rao is presently lodged in Nanavati Hospital after the State informed the Court their willingness to shift Rao to the private hospital as a special case. The verdict will be pronounced at 11 am tomorrow.
Besides Rao’s plea for bail, the Court will also pronounce its verdict on a plea filed by his wife Pendyala Hemlatha seeking the Court’s intervention in view of alleged violation of his “fundamental right to health”.
Read more

The Indian Express / by Julio Ribeiro

This is a fit case where the courts should intervene to ensure justice. If the charge of planting evidence is proved, then it is incumbent on the NIA to investigate and ascertain the identity of the culprit.
Boston is an American city that is known to numerous Indians. A degree from MIT is much sought after. A few years ago, my wife and I spent a few days there as my nephew, my sister’s son, was residing in that city. Police martyr Hemant Karkare’s daughter resides there now.
Soon, Boston will be known to policemen in India for something quite different.
Read more

Mumbai Rises to Save Democracy / by Stan Swamy

December 28, 2017: Desecration of shrine at Vudhu Budhruk village near Bhima-Koregaon which commemorates Govind Gaikwad, a Dalit (Mahar) icon. FIR filed against the desecrators (groups linked to the RSS and Hindutva movement. which included a named individual, Milind Eknote a well-known Hindutva leader).
December 29, 2017: Call for a bandh against Dalits by same groups and individuals
December 31, 2017: Elgaar Parishad held in Pune
January 1, 2018: Tens of thousands of Dalits visit Bhima-Koregaon to mark 200th anniversary of memorial to Mahar soldiers. Some clashes between Hindutva groups and some Dalits occur in which 1 person was killed. Subsequently, large protests by Dalits in Mumbai. Police crackdown and arrests of many Dalits. No arrest of any named Hindutva individual.
…
Read more

Recent allegations that planted evidence may have been used to frame an activist in a terrorism case are raising new questions about the surveillance and hacking ecosystem in India.
The human rights activist in question, Rona Wilson, is one of several people accused of plotting to overthrow the Indian government in connection with a violent demonstration in Bhima Koregaon, India in 2017…
While it may be unclear who exactly is responsible for the reportedly manipulated evidence against Wilson at this time, the possible links between pro-India hacking operations and the global commercial sector of surveillance software have begun to emerge in recent research.
Read more

Mark Spencer is the president of Arsenal Consulting, a forensic firm that recently released a report that concluded that incriminating evidence was planted on the computer of Bhima-Koregaon accused and activist Rona Wilson.
In an email interview with Outlook, Arsenal Consulting’s President Mark Spencer elaborates on the process involved in analyzing the data and larger issues with regard to the case. Spencer also contests the National Investigation Agency’s (NIA) claim of no ‘planted evidence’.
Excerpts from the interview.
Read more

How the Bhima Koregaon case has progressed so far gives credence to the claim that malware was planted on activist Rona Wilson’s computer.
On 10 February, Rona Wilson, one of the first batch of activists arrested by the police in the Bhima Koregaon/Elgar Parishad case, filed a petition in the Bombay High Court seeking the dismissal of the case against him. In support, his lawyers provided a forensic report showing that evidence had been planted against him.
Read more