One of the two secretaries general of Forum for Integrated National Security is Seshadri Chari, a senior member of the RSS and the BJP.
A report released by a security think-tank in March into caste violence in Bhima Koregaon near Pune on January 1 had foreshadowed the turn taken by the police investigation into the events. The report pinned the blame for the violence on a Maoist conspiracy – a conclusion that bears striking resemblance to the claims the Pune police has subsequently made in court.
Read more 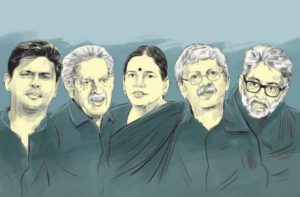 The Hindu / By Ajeet Mahale 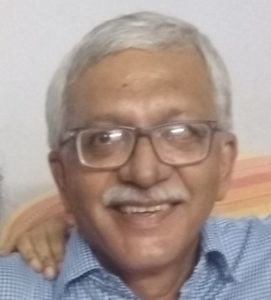 Activist Vernon Gonsalves returned home on Thursday morning after a 48-hour ordeal that started at 6 a.m. on Tuesday, when his house was raided by the Pune police. Mr Gonsalves and four other activists were arrested under the various sections of the IPC and the draconian Unlawful Activities Prevention Act (UAPA). The Supreme Court on Wednesday directed that the five be placed under house arrest until September 6.
Read more

On the morning of August 28 just as the people of Ranchi city were waking up to a clear sky after heavy downpours in the previous days, and preparing themselves for the day’s chores, they were taken aback by the abrupt raid on the home of Father Stan Swamy, a Jesuit Priest and one of the city’s most prominent social and political activists.
Read more

Courts in five different places, including Delhi High Court, Faridabad court, Pune sessions court, Punjab and Haryana High Court and the Supreme Court, have addressed the police’s recent targeting of lawyers, activists and writers, in connection with the Bhima Koregaon violence in petitions filed by concerned members of the academic fraternity.
Read more

Minal Gadling, the wife of advocate Surendra Gadling, on behalf of the five activists arrested on June 6, 2018 — including her husband Gadling, Professor Shoma Sen, Sudhir Dhawale, Mahesh Raut and Rona Wilson — has approached the Supreme Court seeking intervention in a petition filed by Romila Thapar and others. She has prayed for extending the benefit of Supreme Court’s order passed on August 29, 2018 in Romila Thapar case to all the above-named persons who are under arrest since last two months.
Read more

‘…incarcerated in jails, ruining their entire families.’
‘You would see that Dalits who displayed so much agitation over the Bhima-Koregaon issue are effectively silenced by the arrests of their activists by the police.’
‘What can be a more pitiable state than this for a people who had just seen a ray of hope after darkness of millennia?’
Read more

The nationwide crackdown on activists, advocates and human rights defenders is disturbing and threatens core human rights values, Amnesty International India and Oxfam India today said jointly in response to the massive crackdown on rights activists in the country by the Maharashtra state police.
Read more

We, the undersigned, strongly oppose and condemn the illegal raids carried out in different cities, and arrests of Gautam Navlakha, Sudha Bharadwaj, Arun Ferreira, Vernon Gonsalves and Varavara Rao by the Maharashtra Police on 28 th August 2018. These are only the most recent arrests in a continuing wave of repression spearheaded by the police at the behest of their political leaders and their communal and casteist agendas against people’s movements and human rights defenders. The targeting of these democratic rights activists and organizations is anattack on the poor and marginalized sections of our society on whose behalf these activists have been raising their voices.
Read more

In six tents packed to the brim, approximately 35,000 people watched plays, and listened to music and speeches with an anti-caste theme.
Read more