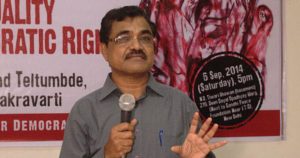 The Wire / by N. Balmurli

Teltumbde’s writing has exposed the hypocrisy of the votaries of neo-liberal capitalism, caste deniers and Hindutva triumphalists. It is they who seek to silence him today.
Teltumbde is one of India’s most well-respected public intellectuals – taking public positions on public issues in intellectually defensible ways through his long-standing regular column with the Economic and Political Weekly, or his frequent op-eds in Indian newspapers, or his scholarly writings in journals and books, or his fact-finding reports on atrocities around the country.
Read more