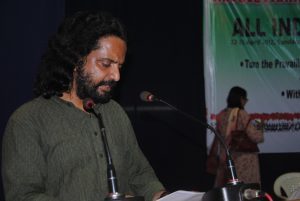 Rona Wilson is the 47-year old Public Relations Secretary of the Committee for the Release of Political Prisoners (CRPP). He was arrested under the UAPA on June 6, 2018, in Delhi, at the same time as Shoma Sen, Surendra Gadling, and Mahesh Raut in Nagpur and Sudhir Dhawale in Mumbai, and accused of channeling Maoist funds for the Elgar Parishad and fomenting violence in Bhima Koregaon.

Rona Wilson came to Delhi, where he is based, from Kolam district in Kerala to study at JNU. Not much is available about his personal biography, except that his friend SAR Geelani mentioned that he had been preoccupied in the months prior to his arrest with working on the research proposal for his application to a Phd programme at a university in the UK.

The CRPP was founded by SAR Geelani, who had been arrested in 2001-02 and accused of having  in the attack on the Indian Parliament on December 13, 2001. He was held for over a year before being  and acquitted of all charges in 2005. He and Rona had been close friends and fellow human rights activists since their days as students at JNU, and Rona was active in the campaign for Geelani’s release and acquittal. As Public Relations Secretary of the CRPP, Rona has spoken and written extensively on the history of anti-terror and preventive detention laws in India, and their use against those critical of the government, and Muslims and Kashmiris in particular. Here he can be seen making this argument in his characteristic systematic, and reasoned manner.

Similarly, the highly-respected Indian journal, the Economic and Political Weekly, carries several letters and obituaries by Rona on political prisoners and leading democratic rights activists.
Even though he has been active for over two decades, this is the first case against him. Since his arrest, Wilson’s family has been inundated with calls and visits by local political leaders.