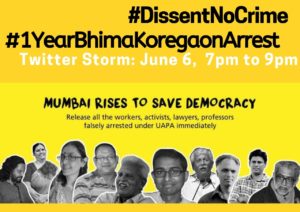 6th June 2019 will mark one year since the arrest of 9 human rights activist and lawyers (Surendra Gadling, Sudhir Dhawale, Mahesh Raut, Sudha Bharadwaj, Vernon Gonsalves, Arun Ferreira, Shoma Sen, Rona Wilson, Varavara Rao) in false cases pertaining to Bhima Koregaon. Though the violence at Bhima Koregaon on January 1 was instigated by Hindutva leaders Sambhaji Bhide and Milind Ekbote, people’s activists were arrested in two rounds, in June and October last year. The 9 activists and lawyers have been targeted for their relentless work for human rights and been falsely implicated under draconian UAPA and Sedition laws in order to divert attention from the real perpetrators of the attacks. The govt of Maharashtra also filed a large number of false cases against dalits and bahujans who had protested against the attack on 2nd and 3rd January 2018 across Maharahstra. The 9 arrested will be submitting a ‘Protest Memorandum’ to Governor of Maharashtra tomorrow urging the govt to end their illegal arrest and withdraw the false case filed against them.

We request all progressive organisations and individuals to participate in the twitter campaign tomorrow and extend support and to remind the government to withdraw all false cases !

We will be using the following hashtags on twitter:

*Mumbai Rises to Save Democracy*