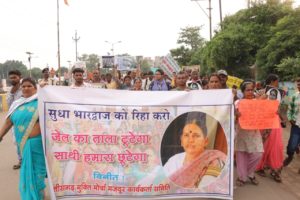 Sudha Bharadwaj was arrested by the Pune City Police on August 28, last year, in connection with the Elgaar Parishad case, for her alleged links with the banned CPI-Maoist.
While arguing in favour of her bail application before the Bombay High Court, an advocate representing activist Sudha Bharadwaj said on Friday that not a single document relied upon by the Pune Police against her was recovered from her electronic devices.
Read more