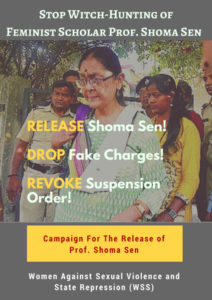 The Times of India / by Shishir Arya

Nagpur: “It’s Independence Day and the second year of my unfreedom begins. Last year on 14th August, I was shifted into the separate cell, my compact little world,” reads a letter written from Yerawada Jail by Shoma Sen, one of the five accused in Bhima Koregaon violence case, to her husband, Tushar Kanti Bhattacharya in Nagpur on August 15 this year.
Read more