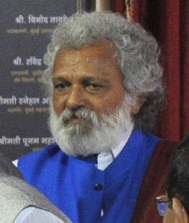 The Times of India / by Sujit Mahamulkar

MUMBAI: People’s Republican Party MLC Jogendra Kawade appeared before an inquiry commission for the Koregaon Bhima violence and blamed the previous BJP-led government for it on Monday.
He said the riots of January 1, 2018, were sponsored by the government of the day and the administration took no preventive measures despite being aware of the plan.
Read more