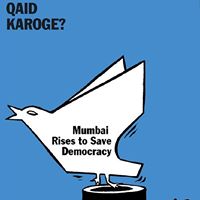 Mumbai Rises To Save Democracy / @MumbaiRises

Statement by Mumbai Rises To Save Democracy on Supreme Court’s rejection of pre-arrest bail plea of Anand Teltumbde and Gautam Navlakha:

Mumbai Rises to Save Democracy (MRSD) is deeply disappointed with the Supreme Court’s rejection of the plea by Anand Teltumbde and Gautam Navlakha seeking anticipatory bail in the cases registered against them in relation to the violence at Bhima Koregaon on 1st January 2018. Their arrest is imminent in next three weeks. Nine other activists and intellectuals who have been accused in this case and charged with sections of the draconian Unlawful Activities Prevention Act (UAPA) have been imprisoned since 2018.

The top court’s order to deny interim bail is alarming given that the case against the activists is based on very thin evidence. Moreover, the cyber forensic analysis by credible investigative journalists and technical experts discredit the evidence used by Pune police to incriminate the activists. The analysis reveals that the letters which were allegedly recovered from the hard disk of Rona Wilson, one of the nine activists accused in the case, and used by the police to link the accused to a banned political party are most likely to have been planted in the disk through use of malware which allowed remote access to Wilson’s computer. This clearly indicates manipulation of evidence and the fabricated nature of the case.

The government is sparing few chances for truth to emerge in this case. In January 2020, more than a year after the chargesheets were filed by the Pune police, the Union Home ministry got the case suddenly transferred to the National Investigation Agency (NIA) and thus brought the case under its control at a time when the Home department in the newly formed Maha Vikas Aghadi government in Maharashtra had announced a review of the case, setting up of a Special Investigating Team (SIT) and dropping of the false cases against the activists.
While full-blown attempts are being made by the government to incriminate the eleven intellectuals in a fabricated case, the investigation into the role of Hindutva brigade led by Milind Ekbote and Manohar Bhide in carrying out planned organised attacks on Dalits at Bhima Koregaon has come to a standstill. The state government’s failure to set up a SIT shows that the real perpetrators of violence are being shielded from prosecution.

These developments in the case and now the rejection of pre-arrest bail to two of the stalwarts of the democratic rights movement in the country on the grounds of what is not just flimsy but manipulated evidence shows the desperation of the government to repress democratic voices and spread a sense of fear amongst those who oppose the anti-people policies and actions of the Hindutva Fascist regime. MRSD extends its solidarity to the eleven activists who have been relentless defenders of human rights and people’s movements in this country and who now stand wrongly accused in this conspiracy case. We also reiterate our resolve to continue to struggle for their release and for the pursuit of truth about the violence unleashed on the peaceful Dalit-Bahujan masses at Bhima Koregaon.