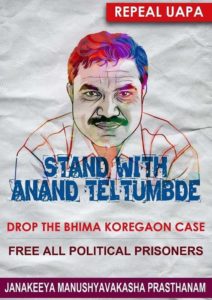 Members of the pan-IIT community – faculty, scientists, researchers, students and alumni issued a joint statement condemning the actions of the state ‘in their individual capacities.’
In a order that surprised many, activists and scholar, Gautam Navalakha and Anand Teltumbde were directed by the Supreme Court to surrender to the Pune Police within three weeks in connection with the 2018 Bhima Koregaon case. This was on March 16. In about a week’s time, the two charged under the UAPA will have to surrender.
Read more

DON’T PITY ANAND TELTUMBDE, PITY THE SYSTEM THAT INCARCERATES HIM

The Wire / by Anirban Goswami and Anupam Banerjee

His incarceration shall remain an indelible black mark on the history of governance of this country.
When he surrenders on April 6, 2020, as per the Supreme Court’s directions, professor Anand Teltumbde will be the first alumnus of the hallowed IIM, Ahmedabad, the first IIT professor and the first CEO of a company to be charged under the dreaded Unlawful Activities (Prevention) Act, which renders a person suspected by the police utterly defenceless.
Read more