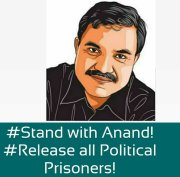 The Tehlegraph / by Special Correspondent

The case comes up for hearing on Tuesday.
A pan-India rights group for education and Ambedkarite scholars from across the world on Monday urged the Supreme Court to reconsider its decision to deny anticipatory bail to Anand Teltumbde, an academic accused of involvement with the 2018 Bhima Koregaon violence in Pune.
Read more

New Delhi: Members of the All India Forum for Right to Education (AIFRTE) on Monday called the charges against academic Anand Teltumbde in the Bhima Koregaon violence case “vague and based on no concrete evidence”, criticising the Supreme Court’s decision to deny him anticipatory bail.
Read more