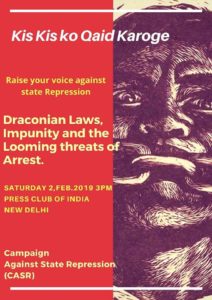 The Government of India’s ongoing crackdown on dissent and free speech is leading to the arrest of journalists, activists, lawyers and students under repressive laws and being sent to overcrowded prisons which are potential COVID-19 hotspots. This crackdown during the pandemic puts their lives at immediate risk, said Amnesty International India today.
Read full statement

‘We have reasons to believe that the investigation is being (mis)used to crackdown on political dissent,’ write the signatories. …
These arrests seem to mark the continuation of a disturbing trend: the BJP government’s practice of covering up the violence committed by Hindutva groups by blaming democratic activists and citizens for the same, and its general disregard for the lives of citizens. Gautam Navlakha and Anand Teltumbde have been arrested over the Bhima Koregaon violence of 2018, even as its real perpetrators such as Milind Ekbote (a leader of local Hindutva groups) roam free.
Read more