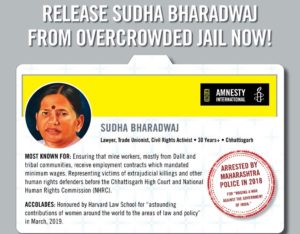 While others who have been accused in the case have managed to stay in touch with their families and lawyers, Bharadwaj’s daughter and lawyers have not been able to do so despite multiple requests and a court order.
Mumbai: Maaysha saw her mother, Sudha Bharadwaj, last on February 22. It was a day after Maaysha’s birthday; she turned 23 this year. In the mulaqaat (meeting) at Yerwada prison in Pune, Bharadwaj – an academic and human rights activist – was barely given five minutes to talk to her daughter who had travelled from Delhi just for this meeting.
Read more

UPDATE, June 10: After nearly 3 months, jail authorities allowed Sudha Bharadwaj to call her daughter & speak to her for 2 minutes.