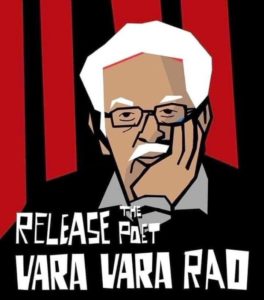 81-year-old famous poet not receiving any treatment inside jail, they say.
Varavara Rao, 81-year-old famous poet incarcerated at the Taloja jail, called his family after eight days on Saturday and spoke about his parents’ death, said his daughter Pavana …
Mr. Rao’s appeal against rejecting his bail is slated to be heard by the Bombay High Court on July 17.
Read more