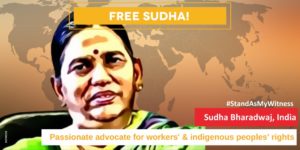 The #StandAsMyWitness campaign urges people to write letters on behalf of the defenders:
Demand the release of Sudha Bharadwaj