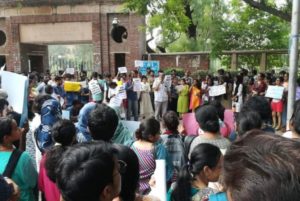 Solidarity program at DU after first raid in 2019

The NIA had arrested Hany Babu for allegedly propagating ‘Naxal activities and Maoist ideology’ and being a ‘co-conspirator’ in the Elgar Parishad case.
A day after a 10-member National Investigative Agency (NIA) team conducted raids at Delhi University professor Hany Babu’s residence, his wife Dr Jenny Rowena said that they will fight the legal battle without giving in to fear.
Read more

Rowena´s partner, Delhi University teacher Hany Babu M.T., was arrested in the case on July 28.
Mumbai: A team of ten officers – eight men and two women – from the National Investigation Agency (NIA) reached the residence of Dr Jenny Rowena, an associate professor at Miranda House, at 7:30 am on Sunday (August 2). The team searched her Noida residence as a part of the ongoing investigation in the Elgar Parishad case, in which Rowena’s partner Hany Babu M.T., Delhi University associate professor of English, was arrested on July 28.
Read more

According to sources, NIA arrived at Dr. Hany Babu and Dr. Jenny Rowena’s residence at 7.30 am today with a warrant under the pretext of evidence collection for Dr. Babu’s case. Dr. Rowena did not allow them to enter the house until her friends arrived.
The NIA came with two women officers and local reinforcements and left with hard disks and papers belonging to Prof. GN Sai Baba’s Defence Committee. Nothing belonging to Dr. Rowena and their daughter was taken.

By Students in Solidarity With Prof. Hany Babu / @WithHanyBabu

We are getting shocking reports that the house of Dr. Jenny Rowena, who teaches in Miranda House, and is wife of recently arrested Prof. Hany Babu, is being raided right now.