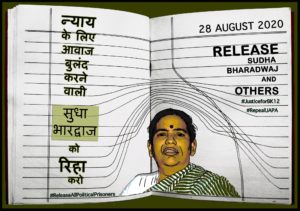 The Indian Express/ by Sadaf Modak

On Thursday, the Supreme Court turned down activist Sudha Bharadwaj’s application for interim bail. The court said that since the plea was on medical grounds, it will not be able to entertain it as the medical report did not back her claims. It, however, said Bharadwaj has a “good case on merits”.
What is the case in which Sudha Bharadwaj and 14 others are arrested?
Read more

+++ Correction: Letters implicating Sudha Bharadwaj were found on the computer of Rona Wilson. The Caravan conducted a cyber-forensic examination of the contents of Wilson’s hard disk, a copy of the disk that was presented in court by the Pune Police and supplied to all the accused. Our investigation revealed that the disk contained malware that can be used to remotely access the computer and plant files. We also found several other discrepancies, pointing towards manipulation of evidence in the case. +++