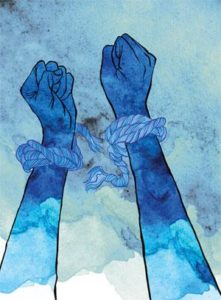 A transcript of an interview (originally in Marathi) of Suvarna Salve.
… What are the qualities of the artists that inspire you?
Suvarna Salve: Activists like Sagar Gorkhe, Ramesh Gaichor, even Sudhir Dhawale have contributed immensely to the Ambedkarite movement. I always wondered how someone could be this dedicated to a cause, leaving behind their personal life and dedicating their entire lives to the movement. This dedication and immense persistence inspires me and has a place in my heart.
I have worked with Sudhir Dhawale for four years after his initial release and I have seen myself grow during the time I worked with him. I consider myself much more politically developed and mature now than I used to be before I worked with him…
Read full interview