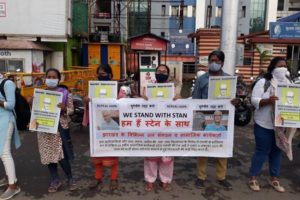 The Indian Express / by Abhishek Angad

Swamy’s arrest has led to widespread protests in Jharkhand, where he has been based for over two decades. Various civil society groups and activists have criticised this arrest.
Two days before his arrest, Father Stan Swamy, 83, a Jharkhand-based Jesuit priest, human rights activist and writer who was arrested by NIA on Thursday in the Bhima Koregaon case, had in a video statement spoken about his work on displacement, land alienation, rights of gram sabhas and of Adivasis in jail, among other issues.
Read more