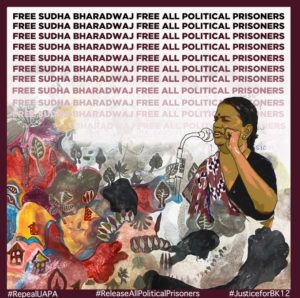 By Friends of Sudha Bharadwaj

Sudha Bharadwaj is a trade-unionist, activist and lawyer who has lived and worked in Chhattisgarh for over three decades. On the 28 th of August 2018, along with other lawyers, writers and activists, Sudha was arrested under wrongful charges in the Bhima Koregaon case and put in jail under the draconian UAPA law. Part of the vibrant labour movement that began in the iron ore mines of Dalli Rajhara as a young activist, Sudha was urged by workers to study law and fight for them in the courtroom.
Visit website