By Jesuit Conference of South Asia 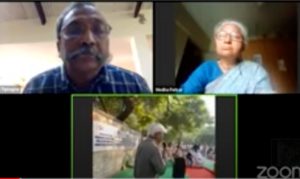 en | 1h | 2020
In response to the arrest of HUMAN RIGHTS DEFENDERS across the country including Fr. Stan Swamy, we are unitedly organized a National Solidarity Day Today (12 October).
Watch video

Panaji, Goa: Over 200 Goans converged at the Azad Maidan on Monday evening despite the inclement weather in solidarity and to demand the release of 83-year-old Jesuit priest Fr Stan Swamy, incarcerated in the infamous Bhima Koregao case. Read more

Bangalore, Karnataka: 3 km Human Chain In Bengaluru:A lot of protestors fashioned a human chain in Bengaluru at present towards what they described as “the unlawful therapy and arrest of Father Stan Swamy from his residence in Jharkhand by the Nationwide Investigation Company (NIA), falsely implicating him within the Bhima Koregaon case.” Read more

“It’s against the principles of Indian Constitution to arrest those who raise their voice against the butchering of democratic rights of the tribals,” he said.
Thiruvananthapuram: Kerala chief minister Pinarayi Vijayan on Monday termed as “unfortunate” the arrest of tribal rights activist and Jesuit priest Father Stan Swamy for his alleged involvement in inciting a mob to violence in Bhima Koregaon near Pune on January 1, 2018.
Read more