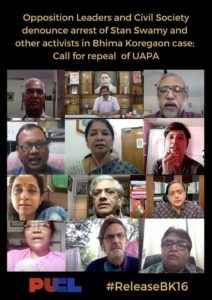 A multi-party press conference organised by the People’s Union for Civil Liberties (PUCL) condemned the arrest of Father Stan Swamy, a tribal rights activist and social worker based in Ranchi, Jharkhand. Swamy is the latest victim of the National Investigation Agency’s (NIA) mission to hunt down people reportedly linked to the Bhima Koregaon incident, which the agency says was orchestrated by Maoist groups…
Leaders from the Communist Party of India (Marxist) and the Nationalist Congress Party (NCP) and Jharkhand Chief Minister Hemant Soren have demanded Swamy’s release and said a movement to repeal the archaic and dangerous Unlawful Activities Prevention Act (UAPA), under which activists, intellectuals and lawyers have been arrested, must gain momentum.
Read more

‘Today it was Stan Swamy, tomorrow it will be us’: Opposition leaders call for repeal of UAPA

Hemant Soren, MPs Shashi Tharoor, Supriya Sule and Kanimozhi urged the people to speak up against the Centre’s attempts to ‘chip away at the rights of people’.
Opposition leaders on Wednesday expressed solidarity with 83-year-old Jesuit priest and human rights activist Stan Swamy, who has been detained under the Unlawful Activities (Prevention) Act in connection with the Bhima Koregaon violence case along with several other activists.
Read more

Leaders from the Congress, Left and DMK slammed the arrest of octogenarian Stan Swamy over alleged links with the Bhima Koregaon case.
NEW DELHI: Leaders from across the political spectrum called for the repeal of UAPA and said there was an urgent need for Opposition parties to unite to fight the ruling party in order to protect the country’s constitutional values.
Read more