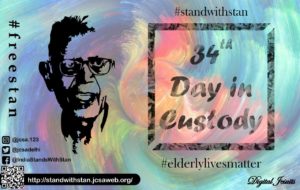 Tribal groups in state launch campaign.
At a meeting held on Sunday evening at Bihar Club in Ranchi, over 50 representatives unanimously decided that the arrest of Jesuit priest and tribal rights activist Father Stan Swamy, 83, by the National Investigation Agency on fabricated charges, denial of bail and delay in grant of permission to use a straw and sipper cup for drinking to a person suffering from Parkinson’s disease has exposed the Centre’s desperation against those who raise voices for tribal, minorities and Dalits. They said people at village level need to be made aware about the government’s agenda.
Read more