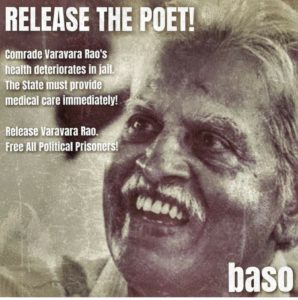 By Release the Poet Committee @ FB

Release the Poet Committee’s statement at Kolkata Press Club on 23rd Nov
“…If we look upon the flood of tweets and whatsapp texts, memes and mimics denouncing the highest seat of judiciary – the Supreme Court – in the last few months, we could clearly see that it was unprecedented in the history of India! People are openly getting judgmental and bitterly critical about the so called “temple of justice” discounting the risk that is ‘contempt of court’. The state should lend an ear to this alarm, which is, ACTUALLY, directed to them.
… The court commented about Varavara Rao that “he is almost on a deathbed”. Despite that the bail was not sanctioned. His hospitalization is meant for sending him back to prison, not to release him. You just listened about Stan Swamy’s urge just for a simple water sipper (or a straw) to sip water, which the court could defer for no less than twenty days, where a special hearing even on a holiday could be scheduled for some statist journalist! And it is not that we are demanding their release only for being aged, rather we demand the release of the younger ones like Rona Wilson, Mahesh Raut, Sharjil Imam or Umar Khalid as well – because instigated by some of your hidden agenda you cannot confine anyone under trial for indefinite tenure without any believable supporting fact against them.
“…The political prisoners, whom we call BK-16, are accused for their ostensible ‘link with the Maoists’ which is not established till now. That is not at all our point of interest; we are here to defend their rights. But even if anyone from them concedes that she/he has an ideological inclination or a democratic support to ‘Maoism’, he or she cannot be reprimanded for that. The High Court of Kerala, which is an inseparable part of this judiciary, has held (in 2015) that ‘‘being a Maoist is of no crime… the police cannot detain a person merely because he is a Maoist, unless the police form a reasonable opinion that his activities are unlawful.” We want to know, what are the evidence of ‘unlawful activities’ judiciously established against them?
I would appeal to the media to get focused upon how the state is splitting up its own institutions into two, and put them in a harsh confrontation. Consider our stand secondary today, but don’t miss the self-contradiction within the power, if to comprehend the fallacy of this system.”
[Condensed]
#releasethepoet #releasebk16 #ReleaseAllPoliticalPrisoners