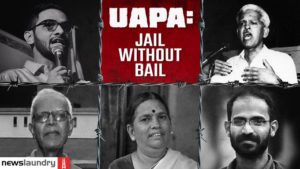 You may lately have come across stories of activists and journalists being charged under the Unlawful Activities Prevention Act, or UAPA. The UAPA is an anti-terrorism law which has been used against activists associated with the Bhima-Koregaon movement, the citizenship law protesters, and even a journalist on his way to cover the Hathras rape and murder…
Meghnad S takes you through the history of the UAPA, its evolution from an anti-secession legislation to being an anti-terrorism law, and how it has been misused by successive governments.
Watch video