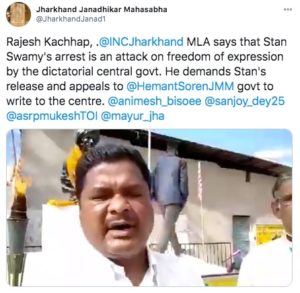 By Jharkhand Janadhikar Mahasabha / @JharkhandJanad1 (Dec 12):
Rajesh Kachhap, @INCJharkhand MLA says that Stan Swamy’s arrest is an attack on freedom of expression by the dictatorial central govt. He demands Stan’s release and appeals to @HemantSorenJMM govt to write to the centre.

A protest has been held today, International Human Rights Day, outside the High Commission of India in London, organised by the UK-based Jesuit Missions, to mark the launch of an international campaign calling for the immediate and unconditional release from prison of Father Stan Swamy.
Read more

This Human Rights Day falls on the 10 December, and Jesuit Missions is inviting you to take action to help free Fr Stan Swamy SJ from prison.
What you can do
We want to raise awareness about what has happened to Fr Stan Swamy. This can be done in two ways.
Read more 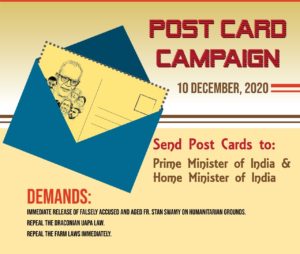 National Level Postcard Campaign Takes Off on Human Rights Day On 10th December, 2020, International Human Rights Day, a nation-wide post card campaign asking the Prime Minister to repeal the draconian Unlawful Activities Prevention Act (UAPA) and to release all prisoners who have been incarcerated under this Act, is being inaugurated.