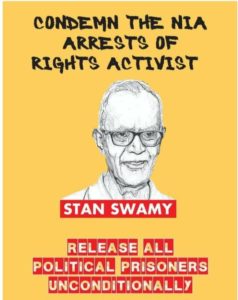 A demand to release an elderly Jesuit priest and 15 other activists was prominent among calls made at programs marking international Human Rights Day in many parts of India.
Several rights groups joined with citizens to organize demonstrations, webinars and marches across the country on Dec 10, expressing their concern over what they said was a governmental attempt to throttle dissenting voices against its policies and programs.
Read more