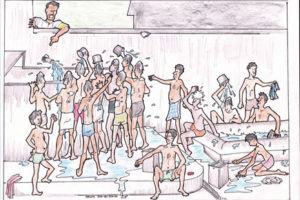 While at one point during the lockdown, the inmate population had reduced to nearly 24,000 – a little over its official capacity of 23,217 – nearly half of the state’s prisons are overcrowded again, some housing inmates more than double their capacities…
Five of the six prisons are overcrowded. At Taloja jail, which had fewer inmates than its capacity of 2,124 before the lockdown, now has 4,080 inmates. The jail, which has inmates including the 10 male accused in the Elgaar Parishad case, Yes Bank founder Rana Kapoor, ICICI Bank-Videocon case’s Deepak Kochhar, continues to receive most of the new arrests from four districts.
Read more