Christmas message: Where are we heading to?

It is now a global festival that has transcended the perimeters of religion and symbolises different sentiments – love, friendship, hope, benevolence, forgiveness and amity.
This Christmas, I remember my fellow Jesuit, Fr. Stan Swamy. December 25 is his 79th day in jail. I wonder how he is celebrating the birth of Jesus Christ at Taloja.
As a true Jesuit, I am confident that he is reaching out to the fellow prisoners and sharing with them the joy of the newborn divine Baby Jesus, and if the jail authorities do not ask him to appeal to the court for permission, he would distribute some sweets and wish them all a Feliz Navidad.
Read more

How Does an 83-Year-Old Jesuit End Up in Prison?

Father Stan Swamy spent decades fighting for the rights of India’s marginalized people. In October, Prime Minister Narendra Modi’s government imprisoned him under antiterrorism laws…
Before he was arrested in October under India’s antiterrorism laws, Father Swamy spent decades championing the welfare of the Indigenous tribespeople who account for around a quarter of the population in Jharkhand, one the country’s most resource-rich yet impoverished states.
Read more

In Conversation with Father Stan Swamy

None would ever have imagined that an octogenarian Stan Swamy would face such a harsh treatment for his committed work for the Adivasis of Jharkhand. When the governments of the world over honor activists who work in tiring circumstances and devote their time to areas far away from their places than we must realise that it is not for money or fame but for pure committment and convictions. Father Stan Swamy was born in Trichy and as a Tamilian Christian he had enormous opportunities for him but he dedicated over thirty years of his life to the service of Adivasis in Jharkhand.
Read more 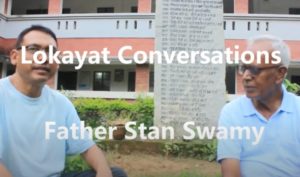 This conversation was recorded about three years back at the Ranchi office of Father Stan Swamy when I visited Jharkhand. Hailing from Trichy district in Tamilnadu, Father worked tirelessly for the Adivasis in different parts of the country. He was also associated with Indian Social Institute, Banglore but his love was Jharkhand where he dedicated his entire life since 1990s.
Watch video