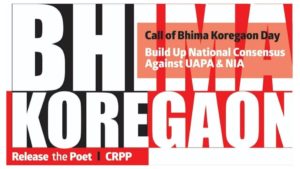 Comrades & Friends!
On the eve of the upcoming Bhima-Koregaon Day, this is our statement on behalf of ‘Release the Poet’ Committee to the anti-fascist people of West Bengal.
In this state as well as throughout the whole country, the danger of Hindutva-Manuvadi Fascists is no longer an impending possibility, it has become a burning truth. The BJP-RSS has reared its ugly aggresive head in West Bengal, taking full advantage of the mismanagement, corruption and dictatorship of the present and former governing parties in the state, and with the corporate-funded financial powers, the muscle power of the Brahmanical Saffron forces, the central judiciary and paramilitary forces.
There is probably no disagreement among any part of the conscious masses on the question of building a united resistance (and building up an united front against this fascist aggression). But there has remained certain disagreements on the question of which call should be kept at the centre of this united forum.
We have received a call from a section of well-intentioned social activists and intellectuals for a convention on January 4, 2021 – primarily aimed at building an anti-fascist united front with the central call “No Vote to BJP”. We welcome this timely initiative to unite the people of the state in a platform against fascism. Around the same time, we received an approach paper from the NRC NPR Pratirodh Mancha – which welcomed the initiative, but also suggested that the “No Vote to BJP” call should not be a prerequisite for the formation of a united platform. Because if it is made a precondition, it will be impossible for those who think that the only way to resist fascism is not by consolidating the votes against the BJP, but by building a united resistance. But since there should not be any division in the resistance struggle at the moment, and our entire power should be concentrated on a single platform, the NRC-NPR Pratirodh Mancha has deliberated that we should be united on the basis of “Resist BJP” or “Resist Fascism” instead of “No Vote to BJP”. We, on behalf of RTPC, also congratulate this call.
We believe that the initiative of the united front against fascism should be only one, not multiple. If we are divided at this moment; the enemy gains, not the people. That is why the foundation of any anti-fascist front must be based on a minimum general program – in this case, to build mass resistance against the BJP-RSS. Whether it is in the parliamentary way or in the form of non-parliamentary resistance – this particular question must not be a prerequisite. If “No Vote to BJP” is the basic call of a united front (in manifesto or content) then certain sections of democratic forces will be forced to stay away from it. For example, the ‘Release the Poet’ committee is skeptical about the possibility of stopping fascism by voting against the BJP.
The latest example of this futility for us is Maharashtra. The BJP lost the last assembly elections there, but the Bhima-Koregaon political prisoners were shifted from the Maharashtra government to the Central organisation NIA without heeding the views of the state government. The Maharashtra government could not play any role there. Similarly, the NIA is directly entering West Bengal and taking away individuals belonging to minorities on false charges of terrorism and the State Government can do nothing but sit idly by. It is important for us to come together on a united front not only for ‘civil society’ but also to build the united resistance of the people in each locality. If any organization or individual thinks that it is possible to stop the BJP in the parliamentary way, it is their freedom, they should have full scope to exercise that freedom organizationally. Similarly, if any organization or individual thinks that resistance outside the parliament is the only way to stop the BJP, that is their freedom, we should also respect that freedom. But the anti-fascist united front should be neutral on the question of ‘vote against BJP’ or ‘vote boycott’.
Our statement is in fact concerned about the possibility of a split in the anti-fascist forces. We stand for unity. As fascism gathers all its strength and intensifies the aggression, we too should have no hesitation in uniting all the anti-fascist forces.
Comrades & friends, the upcoming January 1 marks the third anniversary of the historic day of Bhima-Koregaon, on the pretext of which – there occured a nationwide ‘witch hunt’, and the consequence of which is the imprisonment of sixteen of the greatest sons and daughters of the country. Soon after this, the tools of fascism like the UAPA / NIA Amendment Act were sharpened. Even the depth and intensity of the Reichstag Fire Trial in Nazi Germany has faded in comparison to Bhima-Koregaon Trial! Only by realizing its historical significance can we properly fulfill our responsibility towards the future. Bhima-Koregaon Day demands anti-fascist unity today in the interest of history.